August Schellenberg just guest-starred on a SyFy TV show about which I know little. It must've been a minor role, since this summary doesn't mention him:

The crew of Destiny comes face to face with their ancestors

YaozuComment:  Having Schellenberg play the relative of a Chinese character is questionable. American Indians aren't Asians.

If Yaozu is a leader of Novus Mondus, that would make him a "Novamundian." Kiowa writer Russell Bates might be happy to learn that his made-up name for Indians isn't totally dead.

For more on the subject, see August Schellenberg as King Lear and Yeehaw, Geepaw in Saving Grace. 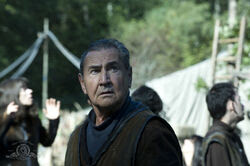