Princeton University freshman Tal Fortgang is a jerk, but he's not an outlier on the issue of racism in America 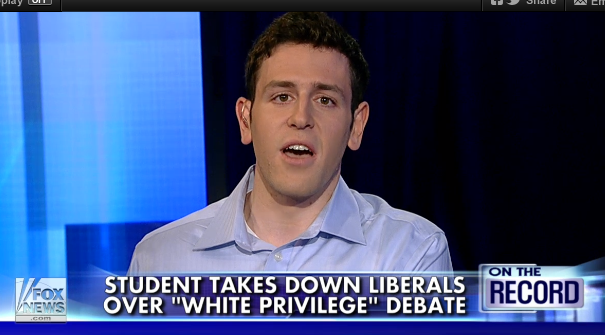 A Facebook friend and I mocked this naive young man:It's a takedown only by Faux News standards.In Fox's fantasy world, repeating a 3rd-grade argument--"my family and I did it all ourselves"--constitutes a takedown. In the real world, that's the default argument that gets taken down, hard, in a debate.Yeah, it's nice that he has a childish "before" argument to get him started. What's his "after" argument after a rebuttal such as this one from the article?Obviously he's preparing for a career as a free-market libertarian, starting a business by himself with no help from the government or anyone.Comment:  For more on white privilege, see Cliven Bundy the Welfare Cowboy and Why No "White History Month"?
Posted by Rob at 5:01 PM