The problem with Quileute werewolves

In The Source for Chief Kaheleha I noted a possible source for one aspect of Stephenie Meyer's Twilight legends.

If Meyer did borrow the "Kaheleha" name, it's not a literary crime. She's free to use whatever names she finds or invents in her fiction. What I object to is her claiming her legends are "genuine" when they aren't.

Non-Natives have a long history of borrowing Native legends, stories, concepts, beliefs, and practices. And then simplifying them, changing them, sometimes bastardizing them beyond recognition. The result is a mishmash of mistakes and stereotypes amid nuggets of actual information.

No wonder people don't understand Indians. Their primary source is popular media such as the Twilight books. Which are based on "genuine Quileute stories," according to Meyer.

What have we learned about the Quileute Indians from Meyer's books? Among other things:

1) Quileutes are in touch with their animal side: hunting in packs, snarling when threatened, literally fighting tooth and nail.

2) Quileutes had (have?) mystical "spirit warriors" within them that can leave their bodies and possess other bodies.

3) Quileutes can grow to an enormous size in their human forms.

4) Quileutes are ruled by werewolves, not by an elected tribal council. (Does the BIA know the Quileute Nation is a werewolf-controlled dictatorship, not a democracy?)

Except perhaps for 1), none of these are the typical stereotypes we see so often. But they aren't genuine facts about the Quileutes either.

What will people think when they read Meyer's "genuine" legends? That Quileutes are less animal-like, less mystical, less exotic than other people? That they're more conventional, more modern, more sophisticated than others? I doubt it.

Meyer hasn't exactly turned her Indians into New Age mystics. But the effect is similar. Readers will think the Quileutes are more mystical and less real than they actually are.

Here...read what Indians have to say about New Age beliefs and practices. Below are a couple of quotes from that page. These quotes are talking about New Age mysticism, but they could be talking about Twilight's version of Quileute history and culture:For more on the subject, see Quileute Werewolves in Twilight.

Below:  The present chairperson of the Quileute Nation? Perhaps testifying before the Senate Committee on Indian Affairs on an environmental issue? Perhaps something about how the Quileutes will manage the forest if they move their reservation inland to avoid coastal floods?

Or not. Perhaps just a stereotypical notion of what a wolf-like Indian would think. 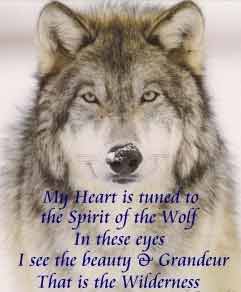 Oh snap! I wasn't going to comment because a) I don't read and am now averse to reading "Twilight" and b) I like to pretend it doesn't exist, what with magical brown wolf people and sparkly vampires being a definite turn-off bookswise.

But, my aunt is "The OTHER Maria" on the Hathor Legacy, and what do you know, I just checked the page now and It's More Magic Natives!

So, can I say I am revolted by Stephanie Meyer? I think I can. I'm revolted by shoddy research even when it's not reducing my personhood.

Or, attempting to minimalize my personhood by the implication that I am interchangable with any number of magical minorities.

When I see someone demonstrate 'Indians,' in a book, Normally I get curious and otherwise read it. Meyer's Twilight Saga, involving the Quileute Indians and the Makah, indefinitely got my attention. I have spent the better part now of my time reasearching the legends hidden within their Tribe, and though it is more than likely possible that Meyer took an idea and ran with it - I have come upon the otherwise fascinating discovery that though the Quileute's aren't Werewolves, They DO have the symble of the Dog Princess involved incredibly within the Tribe. It's even painted right on the QTS Building in La Push, Washington - and it is definitely possible that Some truth exists to atleast part of her 'Genuine Legend.'

I'm italian i haven't understand all the "the problem with quileute werewolves" but..
We (me and my firend) want know the true of the legends..
We're twilight fan but quileute and cold legends are very strange...they are true or not?
We must use english google for this "RICERCHE,STUDY"
but we don't undesteand very much...
Quileute are wolfs?
The cold are vampires?
:S
Beautiful...
Bye
vivi

I fail to understand the drama surrounding the book series, IT IS A WORK OF FICTION AND SHOULD NOT BE TAKEN AS FACT.
Those of you who cannot understand which is which should probably stop watching 'reality television'.

The book and Stephanie Meyer are not out to get you or your'personhood'. There is no vandetta, so stop being so god damn paranoid.

IT IS JUST A STORY, NO WHERE IN THE BOOK DOES IT STATE THAT ANYTHING WRITTEN BY STEPHANIE MEYER IS COLD, HARD FACT.

You never read so let me sugest you visit your local library and discover for yourself that there 's such a thing as a FICTION and NON-FICTION section, and go find where the twilight books are.
Just a hint there in Fiction.
NOT Non-Fiction next to Native American History.

PS: Read the books, and yes the history of the Quileutes is sketchy but it is not called Native American History 101, it's a teenage angst and romance novel.
Much like Harry Potter IT DOES NOT STAY TRUE TO HISTORICAL MYTHS AND LEGENDS,the witches and wizards in the book are nothing like the legends, no mention covens, satan worship, ha,ha,ha.

But really, chill, don't take yourself so seriously.
I mean you find her REVOLTING?

What has she done ?
Has she killed someone?, abused or raped someone? Those criminals are who deserve your revulsion why don't you put all your wasted energy in to helping the victims of crime, their families, using your voice to make sure ther is justice in law.

Re "it is a work of fiction and should not be taken as fact": I already addressed this point when I wrote, "No wonder people don't understand Indians. Their primary source is popular media such as the Twilight books. Which are based on 'genuine Quileute stories,' according to Meyer."

Do you disagree that the primary source for "information" about Indians is the popular media? Then say so and prove your case. Don't bother writing "it's just fiction" again when I've shown how the media affects perceptions.

Re "The book and Stephanie Meyer are not out to get you or your'personhood'": I'm not Native, so her books don't affect my personhood. As for her intent, read about Meyer's Unconscious Racism? and educate yourself on the subject.

Re "yes the history of the Quileutes is sketchy but it is not called Native American History 101": Again, here's what Meyer wrote on her website:

"The Quileute (Quill-yoot) legends Jacob tells Bella in chapter six of Twilight are all genuine Quileute stories that I learned when I was researching the tribe (which is a real tribe with a truly fascinating and mystical history). All actual Quileute legends, except for the vampire myth about the 'cold ones.'"

If you can prove she was telling the truth rather than lying, go ahead and do so. But don't bother pretending these claims don't exist. Whether you're ignorant of them or not, they do.

As for the so-called "Dog Princess," Google doesn't list any websites with information about a Quileute Dog Princess. It sounds like something a giddy Twilight fan made up. Provide a source for this claim if you can, Jessie.

I really don't see how this is a big deal!I mean I'm Native American (Makah tribe actually, well half but you get my point) but I don't think it's a big deal!Let people have there fun!Sure, the stories might not be true but its a fiction book.SO GET OVER IT! Its not racsit in anyway adnto tell you the truth, I enjo the Twilight series very much.

I dont think it states that Stephenie Meyer said it was real but in the storie as they are speaking in the fiction novel I think its alright for the characters to say its real, because thats whats happeneing in the story. However, if it were to say 'Based on true facts(or anything similar)' on the title or at the end (anywhere thats not part of the actual story) then that would be a problem.

Great Article some months ago I found a good site that had several articles and information on the topics of the quileute legend quiletute legends. Like all stories Stephenie Meyer tried to make her twilight series interesting to the reader. Like all works of fiction she puts spins on some known truths or legends in this case the quileute tribe folklore. I don't think it is a bad thing the Twilight Series is entertaining to the reader and the movie was terrific. Although perhaps she should of discussed some of her points of the book with the quileute tribe or something as to not to offend them. Afterall we don't need werewolves running around her neighborhood. J

hey I like the series.
The only Indian we as puerto ricans and (half) antiguans have are those from the Tainos. I wish We had inspired some one to write a kool stroy on us! maybe its bcuz our indians dont have stories like the Quileutes ( we do have some pretty kool tails tho)

But I can understand yur point of view. Ignorant people commin up 2 yu who've read the book are probably rlly carefull not 2 get yu madd. ja,ja,ja. It'll get anoying aftr a while when ppl keep askin if yu've imprinted on yur boyfriend

maybe Steph should write a book about the taino tribe of Borinken! Jatibonicu!!!
..or the tribe of Antigua? the Arawaks!!
kooool

yes i totally agree with claire.Im canadian and we need some more god damn books THAT ARE GOOD. let us have our fun. Im 14 and i personally like the books.

Also i think that stephinie meyer is an amazing writer and i think that her putting native legends in the twilight series is very interesting.

yes i totally agree with claire.Im canadian and we need some more god damn books THAT ARE GOOD. let us have our fun. Im 14 and i personally like the books.

Also i think that stephinie meyer is an amazing writer and i think that her putting native legends in the twilight series is very interesting.

umm ok Kailyn your a bit rude. but im on chapter 5 of my story. its the continuation of the series but on the rez...srry, but I thought the native legdends are cool.
I understand your disagrement with the books- west side story was a slap in the face for Puerto Ricans...they were ALL white and were speaking giberish! insulting. nut every body loves it and i have to see the show next week.

I understand the need to make a story interesting and all... but Smeyer needs to understand that another people's culture is not her personal plaything. Besides, a little bit (or more) of respect and research can go a long way.

Yeah, there should be a warning that what she sez is not as true as you would think. I mean imagine my surprise when i found out that Alvin wasn't really a chipmunk AND that he lipsynched the whole thing. Friggin fiction, man! Just be happy that they didn't portrayed us indians as drunks, fuck ups, or Russell Means.