I don't know where the creators of the Wendigo movie and cartoon series got the deer head and hooves from. According to Wikipedia, it should look more like this:In other words, not like the Marvel Comics version, which makes him a big hairy beast. More like one of these: 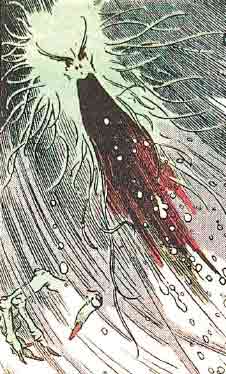 Naturally, after reading this, the next episode of Wolverine and the X-Men aired. Guess who's in it (and first 2 don't count)?

Also featuring Wolverine and the Hulk in Canada, besides the obvious "bad guy of the day".

Actually, from a person knowledgeable and the first person to talk about wendigos or wendagos to me said that Wendigos are spirits so at the beginning they have no form yet until they come face to face to whoever is around and reflects either their worst fear or any form of thing that would even make a person nervous at the time. Once this old indian told me that a wendigo came to him in the form of an old woman who had one red eye and as she looked at him peered into his soul. That's mostly what they do scare you. Real reasons are unknown but I beleive that they feed on fear much like people with adrenaline lust or adrenaline junkies but the difference is they need it instead of want it

I agree agree with anonymous 2. Wendigo are formless spirits of fear. Some say that they are the soles of cannibals.

I have a book that talks about different myths from cultures around the world, and in North America Wendigos are known as monsters that can take different forms, it's said that they are the spirits of lost human hunters, who turned cannibal. In Canada the Wendigo is an amphibious alligator like creature with cloven or bear feat. And among the Ojibway, the Wendigo is just an ogre like creature used to scare children into doing what they're told.

frickin first one is a draegloth.... half drow half Glabrezu... its a fantasy half demon, not your damn wendigo.

I first encountered the Wendigo,in his first appearence in that 1970's Hulk comic.I liked what they did,making a kind of sad,misunderstood creature like the Hulk.The horn might have come from some imformation out on possable description of the Wendigo-I've come across.Marvel I think wanted their Wendigo to be similat to the Bigfoot,popularized at the time and also make him much more Hulkish.
I've been looking Wendigo stuff researching a character,I'm developing but most is either the Marvel version or lots of comfusing material.I wish was a definate illustration,but everyone seems to different ideas on the Wendigo,I guess I'll just go whatever I can make up,based on what I can find.I don't want to too mythologically acturate,but I do need to understand the mythology.Most of the time,you have make up stuff-mix the Prodator with Wookies,because most myths and superstitions are based on fear and ignorance,not logic and science.Since I'm developing a science fiction concept,not fantasy and certainly not horror,commom sence will overule ignorance and fear.Also making the Wendigo just a canibal evil spirit won't give the bit of heroism,i want my savage beast men to be.