A recent discussion with Ron about minority comic books. It's based on my All-White Avengers Isn't "Contrived"? posting:Do books with minority characters fail at the same rate as other books? Even when they have the same top writers and artists and are given the same marketing push? I don't know, but those are the type of questions we'd have to answer.My theory is that the Milestone comics weren't that good. I read some of them and they were borderline.

Diversity is the best solution in theory. But judging by the latest Avengers lineup, it isn't happening in reality. In a country that's 36% minority, the team is all white.

I don't think anyone is proposing a Black Avengers as a long-term or permanent solution. But as a short-term alternative--perhaps a limited series--I don't have a problem with it. As you may recall, I've proposed doing a Native X-Men story. This would be roughly the same idea.

Global teams of heroes I think Marvel is objecting to the black concept first and the "Black Avengers" name a distant second.

If they cared about the Avengers name and not the so-called diversity "agenda," they could use a failed title like the Defenders or Champions for a black superhero team.

DC had its Global Guardians, New Guardians, and Justice League International. Now Batman is creating a Batman Inc. with Batmen (Batmans?) from around the world. These things are roughly the same idea but with a manageable number of characters.

The closest Marvel has come to an international team is its Contest of Champions mini-series. Unless you count all the X-Men characters as one global group of heroes.

"The 99" is an ongoing series about Muslim superheroes. I believe they come from around the world--from the US to Europe to Africa to China--because Muslims live everywhere. The religion is the same but everything else--race, culture, etc.--varies. That's also a similar idea.

For more on the subject, see Comics Diversity Is an "Agenda"? and Top 10 Racist Comic-Book Characters.

Below:  The Falcon, an occasional member of the Avengers. 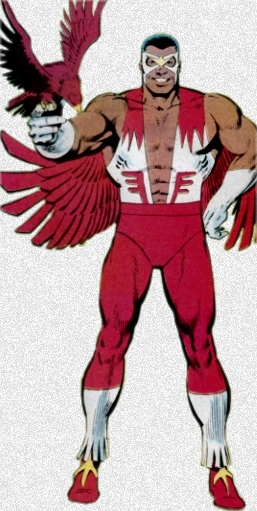 They made a big deal about The New X-men being international at the start, and they still are, so I would count them.

Yes, and there have been other international teams. Going back to the Blackhawks and Sgt. Fury's Howling Commandos, at least.

But Ron specifically said one hero from each country. In general, comics haven't given us anything that diverse.