Adrienne Keene writes about a t-shirt she noticed in her Native Appropriations blog:

Um, Not Make BelieveComment:  Adrienne goes on to speculate that "maybe you were trying to make a social commentary about how this particular stereotyped image of a Native person is make believe and only bears minimal resemblance to the millions of Native peoples alive today, or even to Geronimo." Maybe. Or maybe it was some sort of statement about belief. E.g., if you believe, and imagine the world ("make believe") you want, you can be like a generic Indian, who dreams of peace and harmony and buffalo and tipis. I.e., a natural paradise--a land untainted by pollution, plastic, and population.

Actually, since the company name is Make Believe, they probably didn't intend much of a message. They probably could put any dreamy or starry-eyed person above the logo. (Note the stars where an earring should be.) Be like an Indian, or anyone who thinks, and "make believe." 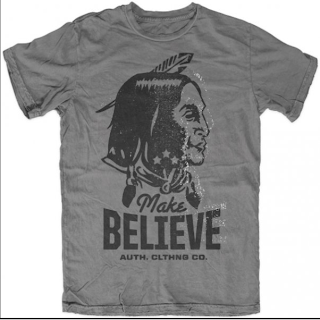