In Germans Plan Winnetou Movie, I described the latest effort to bring Winnetou to film. I wondered how the filmmakers could reconcile their love of the original novel with their modern sensibility. How could they feature a white savior, savage Indians, and reams of mistakes and stereotypes without rewriting the whole book?

I posted these questions on the NativeCelebs page in Facebook. This led to the following exchanges with one of the German producers:

Style of the Film--Author's Note

The first Winnetou book depicts a whole tribe of "murderous savages" who capture Old Shatterhand and Winnetou. Indeed, the majority of Indians in the book are murderous savages. How do you propose to counteract this stereotype if you remain faithful to the book?

The book itself portrays most Indians badly. So you're either going to change the book's story or remain faithful to its stereotypical message. I wonder which?No genocide in Winnetou?

As I understand them, May's books portray a largely empty American West with a few bad ranchers, miners, and Indians who cause trouble. There's no mention of the US government's genocidal actions, Manifest Destiny, broken treaties, Trails of Tears, etc.

The first book shows you what you can expect. A good Apache tribe, mostly off-page, with made-up names and cultural traits. A bad Kiowa tribe, mostly on-page, with murderous savages. And nothing else--no mention of the hundreds of tribes that existed across the continent with a rich diversity of cultures and languages.

Again, is your movie going to change all that? Or are you going to remain faithful to the books? It can be one or the other, but it can't be both.Both those movies were flawed with stereotypes. I hope you do better than they did. And again, none of this context is in Karl May's books. Or in your write-ups of what you intend to portray.You want me to rewrite your information above so it's clear you're critiquing May's flawed storytelling rather than embracing it? It may be difficult for you, but it would be easy for me. <g>The discussion continues

In the book, Old Shatterhand leads a surveying party that ultimately contributes to the Indians' downfall. The book portrays him as superior to every Indian, including Winnetou. Indeed, Shatterhand is a Christ-like savior figure to the poor savages. Winnetou and his sister ultimately embrace Christianity to make them palatable to readers.

Also, portraying the Apaches as paragons of "sustainability" is somewhat misleading. They were one of the less peaceful and more warlike tribes in America. Making them tree-hugging nature lovers is almost as bad as making them murderous savages. A three-dimensional portrayal would be better.

Let us know if you're going to change or critique any of these things in your movie. Otherwise, it's likely to be as stereotypical as the book was.

This is a case where Johnny Depp has the right idea. Reinventing the Winnetou story to make the Indian clearly superior to the white man would be a good idea. Portraying Old Shatterhand as the "Sacred Bear" who comes to "protect" the Indians isn't such as good idea.Winnetou's Apaches are phony

As far as I know, neither Old Shatterhand nor Winnetou's Apaches expressed any love of nature or respectful living in harmony in the book itself. So you're going to change May's superficial and false portrayal of Indian life? If so, good. But none of that is evident in the worshipful write-ups you posted above.

Here's the key quote from the Winnetou prologue:

"[The Indian] became through no fault of his own a slinking, lying, mistrustful, murderous redskin."

May doesn't say this happened to some Indians. He says it happened to the Indian—that is, to every Indian. The proud huntsman has become a murderous redskin.

Winnetou and his phony Apache tribe are the only exception to this rule. They're good but most Indians are bad--i.e., murderous savages. If you change this, great, but you won't be telling Karl May's story anymore. You'll be inventing a story that has little to do with the original.

Karl May didn't just make "some mistakes." He fabricated the entire history of the American West from his home in Germany. His books are one big mistake that have almost nothing to do with actual Indian cultures and history.

For my critique of the Old Shatterhand/Winnetou legend, see:

Good things intendedJudging by your worship of Karl May, I'm not sure of that. In fact, I'm not sure you've heard any critiques of May or Winnetou until now. But I hope it's true that you'll make significant changes and fix the many flaws.Okay. But most of my comments will be similar to these. I probably could write a book critiquing the book, but I don't have time for that now. Not unless someone wants to pay me for it. <g>

For starters, I'd say either get yourself some Apache consultants or create a fictional tribe instead. I think many Apaches would be insulted by seeing May's bastardization of their culture on the screen. That may have been okay in 1940 or 1950, when movie Indians were nameless, cultureless savages, but it's not okay in 2011.For more on the subject, see The German Obsession with Winnetou.

Below:  Guess who's really the star of the Winnetou saga? The guy on the tallest rock or the guy he's looking down on?

Winnetou:  "Thank you for saving us, Jesus Christ Great White Father Sacred Bear Aryan brother. Without you we'd be helpless before the might of Christian civilization." 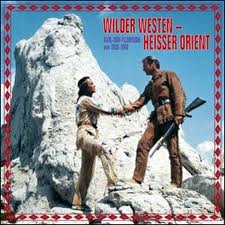