While I was at the California African American Museum seeing IndiVisible, I checked out the other exhibits. I especially liked this one:

Stalwart: The Art of Christopher Carter
March 17-May 15, 2011You can see some of Carter's work here:

Comment:  Judging by Stalwart, Carter seems to like flag designs. But his flags are made of straps, bars, locks, chains, ropes, and other symbols of bondage. With names such as Growth of a Nation and Tread on Me, they suggest how America was built on industrialization and cheap labor, especially slave labor.

Carter's Native influences weren't obvious to me. He's done "Totemic Columns," but they weren't on display at CAAM. I guess you could say the intertwined ropes suggest Native weaving. Perhaps the Native influence is in the underlying theme: the notion that America has kept its minorities oppressed, enslaved, and imprisoned in concentration camps (reservations).

For more on the subject, see IndiVisible at CAAM and Bosque Redondo = Model for Auschwitz. 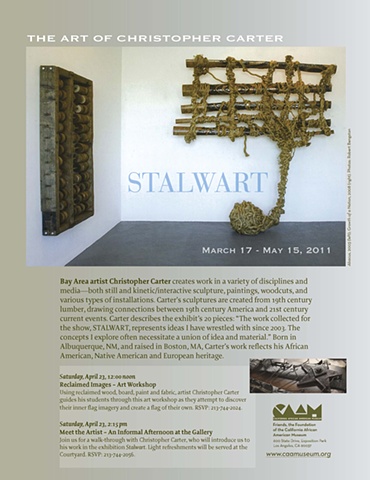