Here's a telling story. How do you insult people of Asian Indian descent? If you're a racist idiot, by comparing them to "savage" American Indians:

By Emily RamshawComment:  This insults two ethnic groups by isolating and comparing them. It suggests that all Asian Indians are the same and they're all like American Indians, who are also all the same. So it's not only racist, it's doubly racist.

And consider how juvenile it is. Comparing Indians to Indians is something you'd expect to hear on a playground, not in a professionally-run hospital. What's next: doing a "ching chong" imitation for Asians or a rap song in Ebonics for blacks?

For more on the subject, see Conservatives Use "Language of Savagery," Grinding Indians into the Ground, and Turbaned Indian Offensive, Chief Wahoo Okay?

Below:  "Drs. Harish Chandna, from left, Ajay Gaalla, Dakshesh Kumar Parikh, cardiologists, in the waiting room of their office in Victoria." (Caleb Bryant Miller for The Texas Tribune) 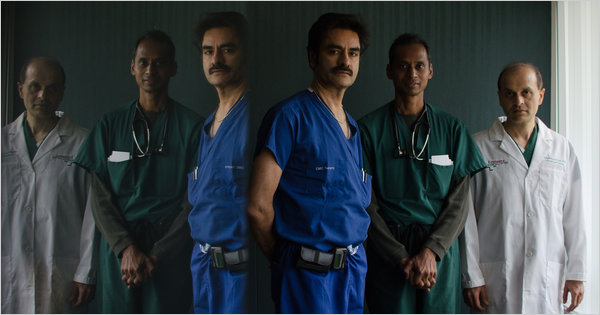