That's a joke, but it shows you how I feel about the "Warriors" nickname. Indians have been stereotyped as warriors a million times. No matter how tastefully it's done, another instance of this stereotype only adds to the problem. We need a million instances of of something other than warriors--of orators, healers, and spiritualists--to counteract the stereotype.

But if the school "has" to use "Warriors," it's done the job right. It has asked permission. It uses a single image in respectful ways. It links the mascot to an educational effort so students actually learn about Indians.

The image below is decent. On the one hand, it's a stereotypical chief. On the other hand, I presume it's an accurate portrait of an Arapahoe. And the off-center shield shape is interesting.

Of course, the previous version (below) was much worse. This is your classic mean-faced, cartoon savage. It's how the school originally perceived Indians. It's what most people think when they think of "warriors."

To reiterate, the super-sensitive approach is a recent addition that takes much effort to maintain. For most people, "warriors" are mean-faced, cartoon savages. For the 300 million-plus Americans who don't meet with the Arapahoe annually, the team name and logo contribute to the stereotype. 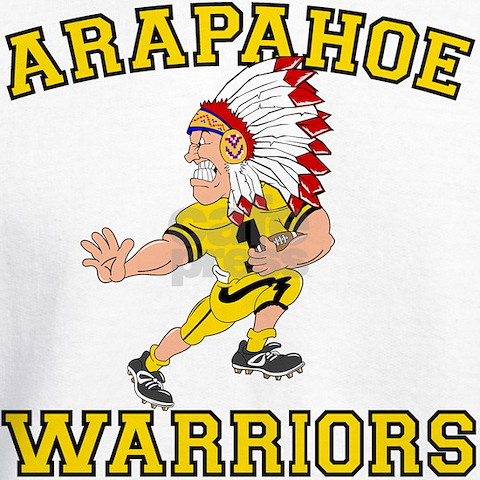 For more on the subject, see Male Warriors and Female Princesses, Alexie on Warriors, and Carpinteria Warriors Don't Dance.
Posted by Rob at 3:58 PM

The CMU Chippewas also do this right, I think.

Visit this web-site. It's interesting and done by a student.