Charles Dickens on The Noble Savage

The Noble SavageDickens's conclusion:Comment:  Wow. Dickens was about as bigoted as his contemporary Mark Twain--another great writer whose work was marred by racism. Now we can say with greater confidence that Dickens's prejudice against Jews, as shown in the character Fagin, was no exception.

True, Dickens didn't want to harm indigenous people himself. But like L. Frank Baum, he basically wished them dead. Nice.

Like many Euro-Americans, his intent was genocidal. Presumably he wouldn't have lifted a finger to stop the people's destruction if he learned about it. This is why the Holocaust and other acts of genocide happen--because the powers that be letting them happen.

For more on Twain, see "Book Indians" in Huck and Tom and Scholar:  Huck and Twain Were Racist. 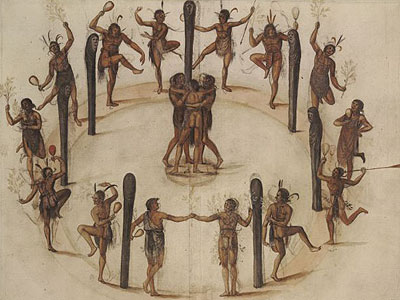 So a man from the nineteenth century held a very typical nineteenth century view. Why is this such a shock? I'm not defending the inherent racism of Dickens's words, but it's hardly a surprise that he was mired in the false views of his age. Racism, as Samuel Delaney Jr. (and many others besides) have pointed out, is a systemic thing. It's telling that when Dickens met more Jews, he drew back from anti-Semitic stereotypes and even (I believe, though I'm no Dickens scholar) expressed regret at having written Fagin the way he did. Perhaps if he'd met more (or hell, ANY) indigenous people, he wouldn't have held the views he did.

And the fact is, Rob, that when you suggest that Christians are habituated to the idea of cannibalism by the Eucharist (as you did in your "Esquimaux" link), you're being just as prejudiced. That kind of cannibalism isn't cultural--it results from hysteria and desperation. I'm no Christian, but it's hard to take calls for tolerance seriously from a guy who traffics in hoary canards like that (I heard a street preacher call Catholics "bloodthirsty cannibals" for exactly the same reason). If you want to be anti-prejudice--anti-racist, anti-sexist, anti-religious discrimination--I would drop the double-standard and treat people as people. Otherwise, I can't see you as anything but a white guy with a crusader complex.

19th century Englishmen tended to have a more Hobbesian view of the past, because...Hobbes was describing his present.

Many people had more moderate views of Indians and other indigenous people. Some, like George Catlin (or Ben Franklin, or Helen Hunt Jackson) even had positive views. It's a common fallacy to think everyone in the past had the same prejudiced views.

Anyway, I wouldn't say I was "shocked." I was surprised that Dickens wrote a long essay based on nothing, I guess, but his brief visit to America. At least Twain traveled throughout the West and presumably encountered Indians. Dickens was more ignorant on the subject, yet he wrote as if he was an expert.

Meanwhile, you misunderstood my comments on Dickens and the "Esquimaux." I was satirizing people who make snap judgments about other cultures based on nothing but first impressions. You know, like someone who sees his first Eucharist and wrongly assumes Catholics are cannibals.

Sorry you missed the obvious satire. Read it again and maybe you'll catch it this time. There's no double standard here and therefore no need to change my approach.