Yesterday I wrote about the Maya sacrifice in an episode of The Simpsons. If you're like me, you may wonder about the alternatives. Was the only choice to portray the Maya badly or not to portray them at all? Or was there a way to do the bit without insulting them?

Answer: Yes, of course. You can make fun of any situation without resorting to offensive ethnic "jokes."

First, lose the human sacrifice. It's too sensational and not a fair representation of Maya culture.

Moreover, it isn't necessary for the "humor" about the calendar's end. The show postulates that sacrificing the wrong person doomed the Maya. Instead, have somebody discover the future "doomsday" while looking at the stars, telling fortunes, or whatever.

If you want to present Maya culture, find something else to showcase. For instance, talk about the lack of domesticated animals. Or the slash-and-burn agriculture. Some archaeologists believe the Maya caused their own demise by cutting down the trees and depleting the soil. So have the Maya boast about how their civilization will last forever because they're such good ecological stewards.

If you have to do a sacrifice, turn it into a joke by executing a non-Indian. It could be anyone. For example: Columbus, Custer, Thor Heyerdahl (for speculating that the Maya came from Africa), Mitt Romney, Kim Kardashian, Tim Tebow, or Matt Groening.

If you insist on doing the already-tired "doomsday" scenario, do something original. Have the destruction caused by Egyptian, Greek, and Norse gods because they like to smash things. Or by the Christian, Jewish, and Muslim gods arguing about whether they're one God or three different gods.

Have a modern Maya Indian running around contradicting what everyone believes. He or she could say, "No! We didn't predict this! There's not supposed to be any harm or damage! 2012 is supposed to be a period of reflection and renewal, not death and destruction!"

For more on The Simpsons, see Navajo Boy in Brother's Little Helper and "Arapaho Ghost Dancer" in The Simpsons. 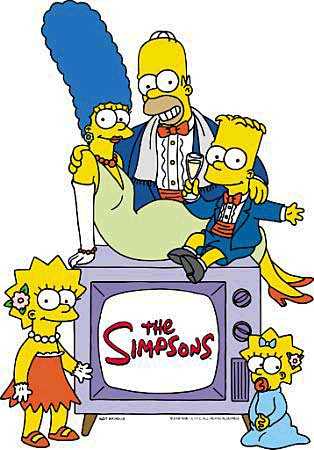