Debbie Reese writes about a children's video game in her Americans Indians in Children's literature blog: 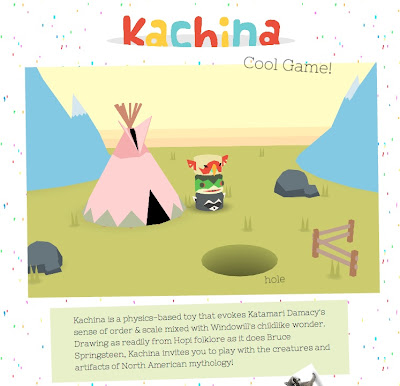 Reese sums up what's wrong with this game:Comment:  We should note that Hopi isn't the only tribe with kachinas. The Zuni and few other Pueblo tribes have them as well.

Looking at the video of the game, there seems to be no Native content besides the teepee and totem pole. No kachinas, which is good, since the Hopi undoubtedly would object. No other artifacts. Maybe a couple of animals.

Basically, it looks like there's no justification for the "Kachina" name. Or for the summary implying the game has substantial Native content. The Native concept appears to be a gimmick to make the game seem more educational and meaningful than it really is.