Indigenous Brazilians use web to fight for rights

By Joao FelletComment:  Once again, the stereotype of Amazon Indians as savage spearchuckers gets blown out of the water.

Below:  "Indigenous Brazilian are using the latest technology to their advantage." 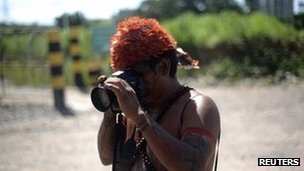 I don't get why people think Indians are primitive or provincial. It's a comforting fantasy for the white people, I guess.