By James McGinnisAnd:More on St. Katharine Drexel:Comment:  A couple of points on the Chaput article. One, Chaput's background is Potawatomi, not "Potowambi." There's no such thing as "Potowambi."

Two, this statement:is a joke considering how Christians--Catholics and Protestants alike--have destroyed Native lives and cultures. Given its long list of crimes against humanity--up to and including genocide--the Church should consider disbanding itself. And giving all its wealth to the indigenous people it tried to eradicate.

Even that wouldn't wash away the blood on the Church's hands. But it would be a start.

For more on the subject, see Potawatomi Bishop in Philadelphia and Catholics to Ban Indian Practices? 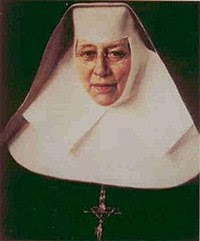