What the crimes of Norway's conservative Christian killer tell us:

By Pierre TristamChristian Jihad?  Why We Should Worry About Right-Wing Terror Attacks Like Norway's in the US

By Frank SchaefferSchaeffer's conclusion:Comment:  For more on the subject, see: 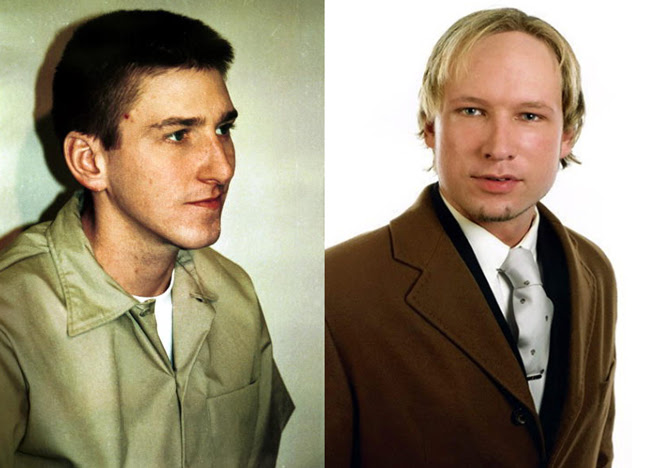 I'd always read that McVeigh was not Christian. In the past, I'd read direct quotations from him attacking the very fundamentals of Christianity.

Check this article out

While a few may use violence to spread their rabid idealogical messages, using bombs and rifles. The more civil and educated will use their positions of power(e.g. Politicians, Law Makers, Judicial, CEOs etc) to further spread the same radical propagendas. Like the ones taking place in Arizona.

Does one need Christianity to be a violent extremist? Muslims say the same thing in that Muslim extremists are NOT real Muslims?

Violence is violence no matter what your religion is. It just seems religious people are more prone to violence than athiests?

dmarks said...
This comment has been removed by the author.
5:44 AM

"Muslims say the same thing in that Muslim extremists are NOT real Muslims?"

Well, of course many/most Christians might use logic like "he did something so horrible and un-Christlike, so he can't be Christian".

However, this has nothing to do with it. I was referring to McVeigh's own views and condemnation of the Christian faith.

"It just seems religious people are more prone to violence than athiests?"

Remember, for the strong atheist, there is no division between atheism and religion. Because that sort of atheism is a religious faith.

Also, if you look at 20th century, the Atheists perpetrated far more horrific violence than theists. Many times more. Pretty much the opposite of what you claim. Strong atheism has far and away the worst record in causing death, persecution, atrocity, as compared to other religions.

dmarks, can you provide some examples of "Strong atheism has far and away the worst record in causing death, persecution, atrocity, as compared to other religions."

Mao, the worst of all. Stalin, not far behind him. And you have Pol Pot, the butchers of Ethiopia in the 1970s, and others. Death totals of many tens of millions, all by leaders who were strongly Atheist in faith.