A Warrior's Heart to be released

In their first lead roles Kellan Lutz and Ashley Greene share star-making chemistry in the heartfelt drama "A Warrior's Heart."Comment:  I reported on this film back in January 2009 when it was just called Warrior. The new title is about as bland as the old one.

The whole "athlete as warrior" thing is such a cliché. I'd be stunned if a movie compared an athlete to a poet, dancer, surgeon, chess player, or robot.

What about Crooked Arrows?

I thought Crooked Arrows was the lacrosse movie. Now we have two lacrosse movies. Will audiences sit still for that much lacrosse?

Like Crooked Arrows, A Warrior's Heart uses a non-Native protagonist to introduce a Native sport. Because we can't have a mainstream movie centered on Natives, right?

Movies where sports are a metaphor for life--where "bad" characters are redeemed by teamwork and camaraderie--are a dime a dozen, of course. Sometimes these movies are good despite the tired, clichéd premise. We'll see whether A Warrior's Heart is a good one or not. 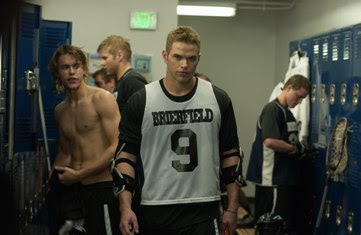 "Because we can't have a mainstream movie centered on Natives, right?"

And it would be just as viable. The actual Native members of the Twilight "Wolf Pack" have as much star draw as Kellan.

Anything with Adam beach in it sucks...