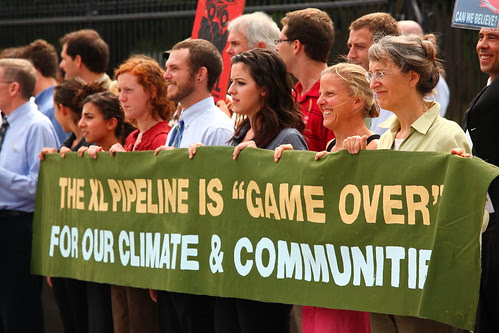 American Indian and Canadian Native leaders were arrested today in front of the White House.

Representatives of Native governments and organizations from the United States and Canada traveled long distances to Washington DC to tell President Barack Obama not to issue a permit for the construction of a controversial 1,700 mile pipeline from Canada to the Gulf Coast.

"The Dene people in northern Canada passed a resolution standing in solidarity with Native Americans and other people opposing the Keystone XL pipeline. We want the people of America to hear our concerns, as people that live downstream from the tar sands development" said Chief Bill Erasmus, Dene Regional Chief of NWT and representative of the Assembly of First Nations.

Gitz Deranger, Dene from Fort Chipewyan, Alberta, living downstream from the tar sands, says, "I have seen the devastation of our people's health with increased cancer deaths. If Obama approves this pipeline, it would only lead to more of our people needlessly dying."