Vote on the 2012 Native American Dollar DesignsComment:  The images are all about Plains chiefs and warriors on horseback. Because that aspect of Native culture hasn't been publicized enough. The only things missing are the stereotypical tipis.

So the design will "feature trade routes of the 17th century and the spread of the horse"? A few problems with this. There's nothing to signify trade routes in the designs. With all the images of lone warriors and buffalo hunters, these designs have nothing to do with trading parties. What they're conveying is the same Western "romance" seen in countless examples of kitschy art.

Moreover, the Plains horse culture didn't reach fruition until the 19th century. And ledger art didn't exist until the late 19th century. So the coins are using stereotypical images from the wrong era to promote the alleged topic.

I suggest you go to this site and vote. And don't pick design #8--possibly the worst of the bunch--which is leading at the moment.

I picked #11, but it was a tough choice among the final five ledger painting-style images. Any of them would be okay.

Any choice featuring a realistic Indian chief on horseback should be disqualified immediately as stereotypical. That's almost literally the last things that should appear on a Native American coin.

The ledger art adds a dimension of information and art to the subject. Even though some of the realistic images are good, the choice should be a ledger painting.

Why no contemporary Indians?

Someone questioned the idea of putting any historical Native images on coins because they have nothing to do with "contemporary Indian realities." My response:

Well, they can't put living subjects on US coins by law. Historical subjects are the norm, although they did reference the moon landing once.

I presumed they were going through Native history chronologically and would get to modern history eventually. Maybe the Indian Citizenship Act, the civil rights movement, or Wilma Mankiller to represent today's tribal leadership. Things like that.

Instead they jumped from the Pilgrims to the Plains culture of the mid-19th century. Are they gonna backtrack and cover the 250 years they missed? Or is the series turning into a Native "greatest hits"? Corn, Hiawatha, Pilgrims, Plains chiefs...let's hope the next coin isn't Iron Eyes Cody crying over the environment.

Was it a mistake?

In that century, I believe the Iroquois (Haudenosaunee) traveled west to the Ohio Valley and south to Virginia and the Carolinas. But more to raid and skirmish than to trade. Various Algonquian and Great Lakes tribes accompanied the French on exploring and trapping missions down the Mississippi River. The Europeans may have used horses during this period, but I doubt the Indians did.

Meanwhile, the Spanish were establishing colonies in the Southwest and Southeast. I believe they were the main contributors of horses to the Plains culture. But I'm not sure they did much trading. They were more into subjugating, enslaving, and converting Indians than trading with them.

So which trade routes are we talking about? Which horse culture? And what's the connection with 19th-century Plains chiefs, warriors, and ledger art? The whole thing doesn't make sense.

Below:  This isn't a stereotypical chief either. It's a lesson about the trade routes of the 17th century and the spread of the horse. Yeah, right. 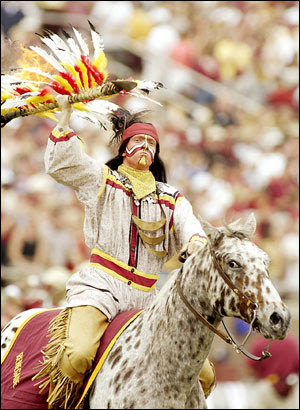