By Michael ZielinskiComment:  Like the reverse of the 2010 dollar, this is another fine design.

It highlights some little-known aspects of history: that the Wampanoag signed a treaty with the Pilgrims, and that they smoked peace pipes. We typically associate peace pipes with Plains Indians.

It's nice that the Indian hand is more prominent and detailed. That conveys a key point: that Indians were active players in, even instigators of, diplomatic relations. They didn't just sit around waiting for white men to hand them a piece of paper to sign. 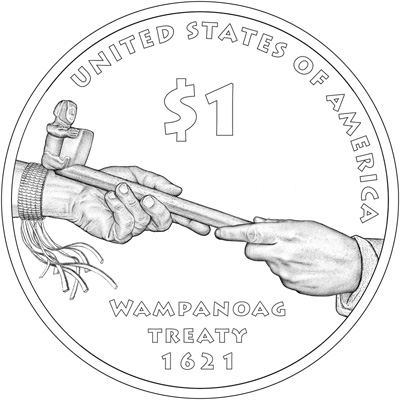 "It's nice that the Indian hand is more prominent and detailed."

You are overlooking another detail: the elevation of the hand, also. For what it's worth, it makes me think of this.

On the tails side of the coin, the image shows two arms extended—one belongs to Ousamequin, the Wampanoag's Massasoit, or supreme sachem, who is reaching out to offer a peace pipe to Plymouth Colony Gov. John Carver. Across the top it reads: "United States of America"; across the bottom: "Wampanoag Treaty 1621."

The $1 coin, which has the image of Sacagawea on the heads side, is the third in a series of coins that will depict Native American historical moments, according to a spokeswoman for the U.S. Mint.

"It's pretty cool," said Ramona Peters, a member of the Mashpee Wampanoag and a tribe historian. "Artistically it could have been better. It could have included some background that gave you more of the northeastern flair."

One problem she pointed out in the design is that "the wampum beads are too small" on Ousamequin's wrist. The U.S. Mint press release also refers to the Pokanoket Wampanoag, but Pokanoket refers to a territory, not a tribe, Peters said. (There is a Pokanoket Wampanoag based in Bristol, R.I., but it is not federally recognized.)