Here's an excellent example of how Fox News will twist anything to gain political advantage.

Network is not happy about inclusion of Sitting Bull 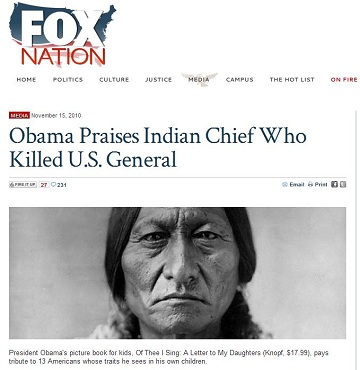 Many people noted that Fox's headline was a flat-out lie. Sitting Bull was too old to fight at Little Bighorn and didn't kill anyone, and Custer wasn't a general then. The criticism continued:

By Michael CalderoneTrail of Tears:  Obama right to include Native American in bookComment:  For more battles over Custer and Sitting Bull, see Custer Re-enactor at Veterans Powwow and Custer's Last Stand and Ethnic Studies. For more on conservative attacks on Obama, see What "I Want My Country Back" Means and Obama Smeared as Luo Tribesman.
Posted by Rob at 9:20 PM

Just wondering - is the summary of the list of people straight out of the book?

If so, I find it interesting that most of them are listed as having done something; Sitting Bull is listed for who he was.

What hypocrisy, when Fox news can reason why this is a nation that kills its own presidents at the behest of gun rights fanatics and that somehow a man of foreign ancestry is legally protected in defense of HIS LAND and property, while a nation or tribe of people that have been here for millenniums' are not allowed to do the same, thats pretty brainless!

These people are what makes the white race look mentally inferior.

The list came from the article I linked to, Kadiera. Since the descriptions are in quotes, I presume they're from Of Thee I Sing. But I don't know that for sure.

But the book's illustration of Sitting Bull bolsters your point. For more on the subject, see Sitting Bull as Landscape in Obama's Book.

“As has been pointed out Crazy Horse of the Teton Lakota was one of the leaders at Little Big Horn,” wrote one commenter. “The other two were Gall of the Hunkpapa Lakota and Two Moons of the Northern Cheyenne. Sitting Bull was in the village but did not participate in the battle.”

“These kind of articles do not help those of us that are anti-Obama,” wrote another. “It gives ammunition to the other side claiming that Fox News is biased. Please stick to facts and avoid re-writing history.”

Patrick Goldstein wrote for the LA Times that Fox News was unfairly rewriting Indian history in order to attack the president: “The Indian wars have been over for roughly 130 years, but at Fox News, no war is too distant in memory to go unnoticed, especially when it comes to opening up a new avenue of attack on Barack Obama.”