Another report on the Oxford mound controversy from last year:

Holstein was a prime contributor to this confusion with his claim that the mound was gone. Now he's recanted his claim. Next time, professor, don't say anything unless you've got incontrovertible evidence. Preferably a personal inspection of the site in question.

And everyone, learn to explain things better. When someone describes the hill, mound, and site(s) clearly, it'll be the first time. People across the nation joined a virtual movement to save the "mound," but I'm not sure anyone knew what they were fighting for.

Below:  The hill or mound in question, with some excavation visible. 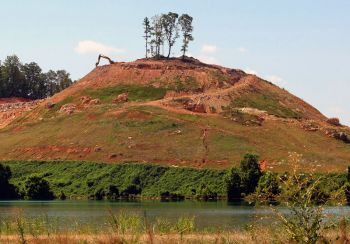 Wow this is a great resource.. I’m enjoying it.. good article