All about Patrick Rolo

By Stephanie WoodardComment:  I'm not sure anyone's artwork is known "throughout Indian country." But congratulations to Rolo for his success...even if it means he's too busy to work on PEACE PARTY.

For more on the subject, see CDC Books at NYC Con and Through the Eyes of the Eagle.

Below:  "At New York City’s Comic Con in October, illustrator Patrick Rolo appeared with a cardboard cutout of Coyote, one of the animal protagonists in a new series of chapter books based on the Centers for Disease Control and Prevention’s Eagle Books." (Stephanie Woodard) 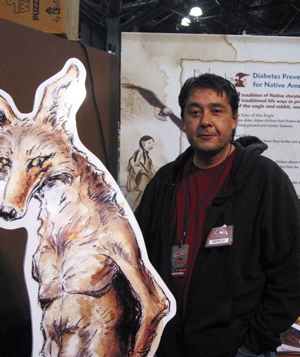