Cowboys and Aliens is no joke

Question for Big Film:  It’s Not a Comedy?

By Michael CieplyThe movie's evolution:Comment:  The first graphic novel was stereotypical and lame, but it wasn't funny.

I think it would be difficult to make a lighthearted movie about white men and Apaches killing each other before they come together to fight aliens. F Troop and Shanghai Noon showed that comedies about 19th-century Indians aren't easy.

I'd expect this movie to be like Independence Day or War of the Worlds, not Alien or Predator. In other words, serious but fun, not serious and frightening.

Where are the Indians?

Alas, the Indians may have a minor role in this movie. They're mentioned only once in this article, and no one's talking about them. It doesn't seem as though they'll be equal partners with the cowboys.

My take is that a significant portion of the movie should be about the cowboys and Indians overcoming their differences and learning to work together. I'm talking about a third to a half of the movie. But I'm guessing that won't be the case. That the Indians will be relegated to Tonto status.

For more on the subject, see Noah Ringer = American Indian?! and Beach's Role in Cowboys and Aliens. 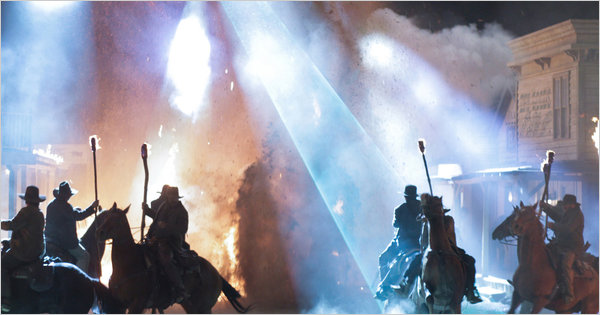 I saw the trailer at the Harry Potter movie. People laughed when the movie title appeared at the end.

What a great resource!