Here's more on the book discussed in Obama Attacked Over Sitting Bull: 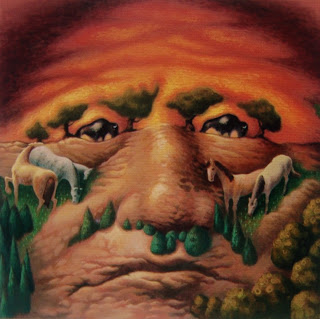 Comment:  The problem isn't only the one-with-nature stereotype. It's depicting Sitting Bull as a remote, otherworldly, even mythical character. The message is that Indians have vanished into the landscape just as Sitting Bull seems to be doing.

Again, if Long had drawn everyone that way, it would be okay. The ultimate problem is treating the Indian differently from whites and other minorities.

For more on semi-mythical Indians, see Bears Replace Indians in Store Window, Vanished Mound Builders in The Prairies, and Neil Gaiman on Dead Indians.
Posted by Rob at 9:44 AM

Of Thee I Sing:  A Semiotic Review by Scott Andrews

In the book’s time machine, we travel back to see Abraham Lincoln speaking to his fellow Americans. In the time machine of our imagination, the book takes us back to see Billie Holiday singing, perhaps in a night club, among musicians. It is unclear that we have entered the time machine to visit Sitting Bull. Are we looking at his spirit in today’s landscape? Or have we traveled back to the western Plains in the 1800s? If so, where is Sitting Bull? Where are the people he led and healed?

This image is created in the tradition of “The Vanishing Indian.”