Here's another item from Adrienne Keene's Bonus Round:  All the Awesome Tips in My Inbox: 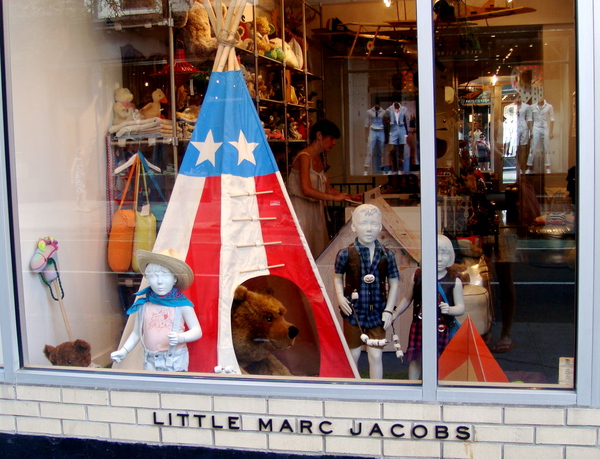 1) The tipi is painted in American colors. Why? My guess is that someone at Marc Jacobs didn't want to display a genuine Native tipi. It might send viewers the wrong message about where Marc Jacobs stands. Some of them might consider respecting Indians the same as criticizing America for its genocidal past. To avoid controversy, therefore, the store went with an "all-American" tipi that no one could criticize. (No one except me, that is.)

2) The tipi isn't inhabited by Indians. It's inhabited by bears. The window is clearly meant to display a cowboys 'n' Indians theme, but with bears instead of Indians.

Again, my guess is that Marc Jacobs was afraid of offending viewers. Someone like me might complain about cultural inaccuracies in the Indians' appearance. Or about stereotyping Indians as primitive people of the past. Or both. So instead the store went with the "safe" choice of bears.

Alas, this choice is even worse. It tells us that Indians and bears are interchangeable. The Indians have moved out, bears have taken their place, and no one's supposed to notice. Either way you've got civilized cowboys and savage animals, so what's the difference?

What if cowboys were bears?

If this doesn't strike you as strange, imagine the opposite scenario. Indians are crawling around in the tipi and bears dressed as cowboys are roasting marshmallows. The Indians are in the superior position because they're human while the cowboys (cowbears?) aren't.

I think people would stop and stare at that display. I think it would generate some controversy and complaints. People would say, "What is this supposed to mean? Is Marc Jacobs saying white men were nothing but brutish beasts who ravaged the land? That's an insult to my pioneer ancestors who settled this country and made it great."

My version of the display seems like something you'd see in an art gallery or museum. In that context, it would be intentionally provocative. It would exist to challenge people's expectations and make them rethink their beliefs.

But no one thinks the same about the present display. It doesn't challenge anyone's beliefs, it confirms them. White people conquered the land, planting their colors everywhere. They dealt with Indians, bears, and other wild creatures. Now the Indians have vanished and only their tipi is left. America is a civilized, safe place where white children can cavort with their animal friends.

Is that a message the store should be sending? I don't think so. But the real point is to think about the display critically. Don't accept that a pro-white, anti-Indian message is "neutral" unless it actually is.

For another example of this "thinking," see Bear Statue Represents Indians. For more on the Indian/animal connection, see Team Names and Mascots.
Posted by Rob at 2:11 PM