I posted my idea about hipsters wearing medals to "honor" soldiers on Facebook. This led to the usual debate with Michael Cooke:I wouldn't suggest having people wear headdresses they haven't earned. But you would because you don't understand the headdresses' significance among tribes.

The comparison between the two is apt, which is why I made it. Maybe you'll catch on now......but I doubt it.Did I say anything about the quality or kind of medals in my posting? No.

People had no clue whether Kesha was wearing a genuine or fake headdress, to cite one obvious example. I, for one, couldn't tell whether it was real from looking at it. So if the obvious falseness of a headdress is your latest line of defense, you need a new excuse for Kesha's minstrel show.

I don't care whether my hypothetical person wears a real or phony uniform and medals. What matters is the person pretends to be a soldier in public...proclaims he's honoring soldiers...and mocks soldiers by doing things real soldiers would find offensive. It's enough that he be recognizable as a US solider--not that he look strictly authentic.

To make this phony "soldier" similar to a phony "chief," he could rip off his clothes and strut like a half-naked Rambo. He could wave his weapons and pretend to shoot or stab people. He could smear himself in blood-red paint and do a victory dance over the bodies of his foes. "Look at the medals/headdress I'm wearing!" our wannabe might shout. "I've earned the right because I'm the world's greatest warrior!"

You think a military veteran seeing this would stop to parse whether the medals were authentic or not? How...by going home and Googling any medal he didn't recognize before returning to the scene and punching the imitator's lights out? Wow...you've convinced me you're totally ignorant about human behavior. You're an idiot if you think this is how the typical vet would react.

What to do about fake headdresses

No, I'm not arguing that any headdress, if inauthentic enough, should be blameless. I'm arguing that any time you mock a soldier's honor, with real or fake medals, you should expect to be vilified. Because we treat military service as a secular priesthood with soldiers as secular saints.

Indians think something similar about chiefs who earn the right to wear headdresses. These chiefs are very much like soldiers who have earned the right to wear distinguished medals. But you don't recognize the similarity because you're ignorant about Indians. You think headdresses are like fedoras or other apparel, even though I've explained why you're wrong.

Your argument about using real medals also fails the "cultural commons" test you made up. People have worn real-looking medals in countless movies, TV shows, and cartoons. According to you, military vets can no longer claim the exclusive right to wear medals they've earned. We can all wear them now because they're part of our "cultural commons." Anyone can pretend to be a real military vet just like anyone can pretend to be a real Indian chief.

Moreover, you've contradicted yourself. "Only Native Americans ... know for a fact the headdresses worn by entertainment performers are poor fakes" and "Performers wearing headdresses are almost certainly wearing (obvious to anyone who KNOWS) fakes." Well, which is it? Did non-Native audiences know Kesha was wearing a fake headdress or didn't they?

I'd never arguing for burning plastic headdresses in costume stores. I would argue for educating people to realize such headdresses are morally wrong. In my ideal world, people would stop buying them because they realized they were parodying and mocking Native culture. And stores would stop carrying them for that reason.

For more on the subject, see The "Honor" of a Plains Chief and Why Hipster Headdresses Aren't Okay.

Below:  Most movies that don't portray the US military in a flattering light don't get the military's approval. For instance, Dr. Strangelove.

Why are soldiers so thin-skinned? Why don't they just lighten up and get over it like people expect Indians to do?

Take something like Dr. Strangelove and multiply it by a million or so to see what Indians have to deal with every day. 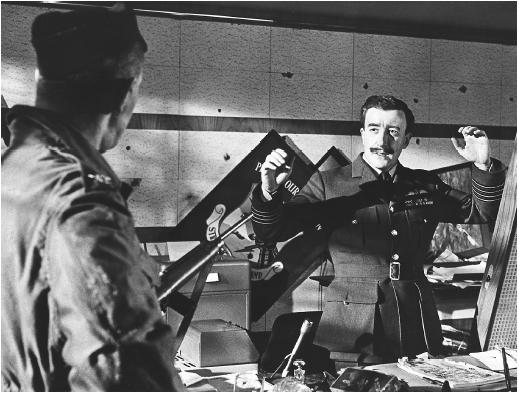