Natives had only three fruits?!

Adrienne Keene of the Native Appropriations blog brings the following item to our attention:

"Legend has it...":  More Natives in Advertising

She saw this sign in Harvard Medical School's cafeteria: 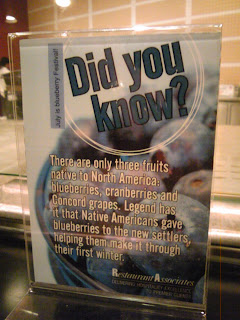 Adrienne notes a couple of problems with this:

1) It refers to generic "Native Americans" rather than specific tribes such as the Wampanoag.

2) It makes the Natives players in the settlers' story rather than stars of their own story.

I could add that the sign obscures what happened by using the ultra-positive word "settlers." Try it with "colonists," "foreigners," "Europeans," "interlopers," or "invaders" and see how it reads. Not quite as benign, I'd say.

But the real problem is the claim that Natives had only three fruits. I never heard this claim before, and it's ridiculous. Anyone who knows anything about Natives knows it to be false.

In fact, apparently this myth is so common that people have discussed it on Snopes.com:You don't have to look far for a debunking. Wikipedia lists dozens of fruits native to North America:

By including only "culinary" fruits--fruits we think of as fruits rather than vegetables--the list excludes tomatoes, pumpkins, and other varieties of squash. So add two of the biggest fruits in the world to the list of Native products.

Someone on Facebook responded to the "three fruit" claim:Savages can't grow fruit?

How has this "legend" lasted when it's demonstrably false? I'd say it's a corollary of the uncivilized Indian meme. Indians supposedly didn't invent the wheel, writing, or metalworking. They were Stone-Age savages, ignorant of the arts and sciences. They were so primitive they had only three fruits! They were able to gather roots and berries like other forest animals, but they knew nothing about real food. You know, the kind that civilized people grew on farms in orchards and vineyards.

(For the record, some Indians did invent the wheel, writing, and metalworking.)

Adrienne's conclusion:Good point, Adrienne. But I'd put this sign in the same category as that ad. Both serve to make Indians look primitive using false or misleading claims.

Only three fruits? How did plants reproduce?

Nothing surprises me about America's so-called institutions of higher learning.

Any country that celebrates a man condemned by his own crown for "discovering" a country that gets named by another traveler (Amerigo Vespucci) who's travelings have always been debated by scholars themselves.

In America's dim-witted, half-truthed existence of continual propaganda and delusional history, should America, with respects to Columbus Day, be named Columbia?

Isn't the tomato native to the America's?

And the entire group of chiles. And pineapple. And some variety of strawberry. And of course the chokecherry.