Adrienne Keene brings another item to our attention in her Native Appropriations blog: 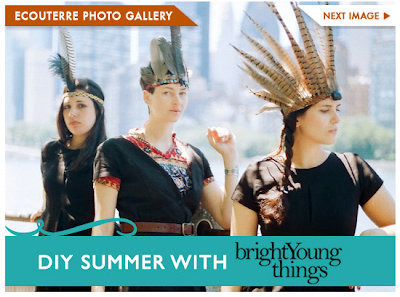 Adrienne let her readers handle this one, and they did so with some scathing replies:I posted a couple of comments myself, but these people did all the heavy lifting. Check out all their comments for a better understanding of why hipster headdresses aren't okay.

For more examples of cultural (mis)appropriation, see Sexy "Indians" in Hipster Headdresses and Tribal Girls in Hot 'n' Fun Video. For more on what's wrong with this practice, see The "Honor" of a Plains Chief and Stereotypes Okay in "Cultural Commons"?
Posted by Rob at 9:18 PM

Is her surname for real?
Sadly I see this blatant disregard of an important part of Indian culture everywhere.From nursery schools to fashion runways & even in the music industry.The last thing we want is a Nanny State of course but the argument I hear is that its F.U.N.Apparently.OK but not Stetsons for some strange reason :o!
I guess basically what Starbuck is telling us is to go eat cake...