Another debate with Michael Cooke on protests--this time in response to Thoughts on the Comic-Con Protest. I started the debate by posting the following on Facebook:

Cooke's response:Both protests challenged bigoted stereotypes: gays = beasts and Indians = savages. Both sent a message through the media: These beliefs and stereotypes are unacceptable.

How the protesters chose to protest is a detail. Once you concede that a public protest is an effective way to bring attention to your cause, my side has won the debate.

According to your "logic," the Comic-Con people should've just let the Fred Phelps protesters go unchallenged. After all, the idea that homosexuals are immoral is part of our "cultural commons." And protesters could be fighting AIDS or poverty among gays rather than challenging the Phelps claims. The two situations are conceptually quite similar.

Fortunately, the Comic-Con people understand how to influence public opinion, unlike you. You don't do it by ignoring the opposite side and hoping it will go away. You challenge it publicly to demonstrate what regular people consider unacceptable in our society. To persuade those who are undecided or openminded that the bigots are wrong.

Racism okay if it isn't hateful?

The Phelps protesters were anti-America only to the extent that America is pro-gay. Their primary target very clearly was gays.

Some of the counter-protesters read about the Phelps protest in advance and prepared accordingly. Not that it matters, but it wasn't just a spontaneous response.

I didn't say the Dudesons were expressing hate. I said the two protests were effective in gaining publicity for gays and Indians against bigotry and stereotyping. What part of that do you disagree with, and why?

The Indians targeted MTV rather than the Finnish performers because MTV is the one perpetuating the offense after being told it's offensive. That isn't innocent fun, it's intentional harm. When you repeat bigoted words and images when you should know better, ignorance is no longer an excuse.

You don't even know what happened at AIM's protest against MTV. You have no clue whether the activists used humor, anger, or what. So spare us the sophistry that there's a right way and a wrong way to protest. You're criticizing AIM because you don't think Native stereotypes are that bad. You're okay with racism against Indians.

Indians can't help it if they're only 1% of the population rather than 10% or whatever for gays. Of course their protests are going to be smaller and less effective. Especially in a place like Southern California where they're diffused among the general population.

So what? That's an argument for changing your demographics, not against protesting as a means of social change. Every movement starts small and gains adherents by establishing its presence. Scattered local activism evolves into sustained national activism. Duh.

You don't need to go to someone's home to protest their activities. Again, you don't seem to get the point of protests. It's not primarily to change the minds of the people you're protesting. As I said before, it's to move the needle of public opinion in general. Your ignorance of this may explain why you don't understand how and why protests work.

Finally, the fact that you consider racist stereotypes "funny" says it all. Whether you realize it or not, you're implicitly prejudiced against Indians. You don't expect people to laugh at the "fags = beasts" meme, but you do expect them to laugh at the "Indians = savages" meme. Thanks for demonstrating your bigotry, bigot.

Below:  Cooke the bigot thinks racist stereotyping is funny. "Ha ha, look at what the dumb savages used to do!" 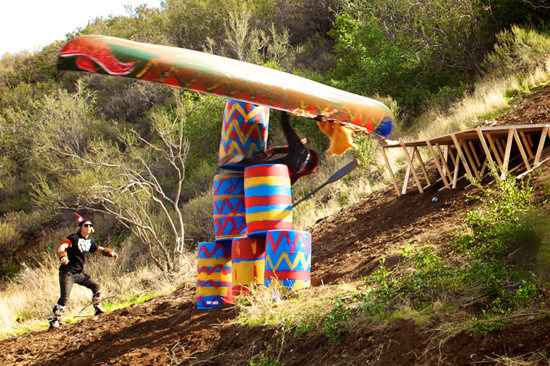 It's a pick your battles kind of argument - At least such is the point I'm trying to make. And because the winning of an argument seem more important than the subject at hand, you're making straw man arguments and attacking positions I've never made.

The Dudesons protest isn't comparable to the comic con counter-protest. It as simple as a protest not being the same thing as a counter protest.

We do disagree on the offensiveness of the Dudesons program, I feel they are clowns and that excuses them the same way being a clown excuses Rush Limbaugh: it's certainly not worth protesting.

Why isn't it not worth protesting? Because there are fundamental civil liberties being denied native Americans. If you've been stabbed, why are you complaining about the insult?