Here's another in our series of almost daily racial offenses against Indians.

This controversy bubbled through the Internet briefly before bursting into everyone's consciousness Wednesday morning.

Station 280 on ComoAnd here's the offense: a flier Station 280 created and distributed in person and online. 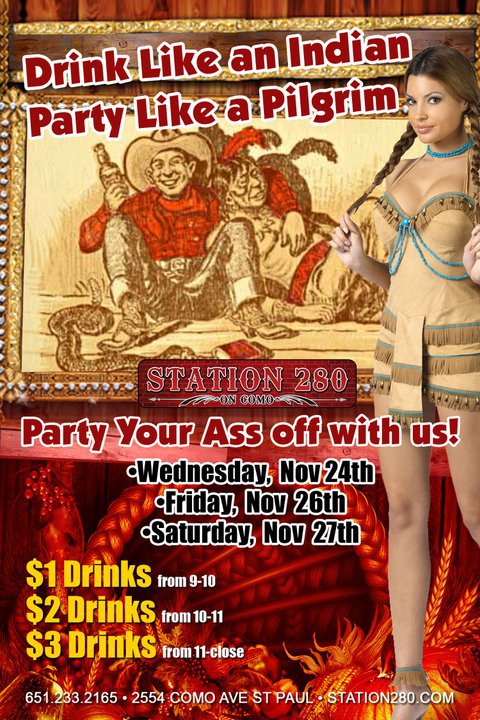 Once people on Facebook realized what was going on, the reactions were swift and sure:After a couple of hours of intense protests (phone calls and e-mails), Station 280 issued this apology:About half an hour later, the offending image disappeared from Station 280's Facebook page.

The story made the news that night:

By John LauritsenComment:  I wonder what Nordin's acceptable number of offended people was. Five? Ten? Twenty? "We sincerely thought this flier would offend a few dozen people. But 75? No way!"

Let's hope Station 280 has better luck offending people in the future. Coming up in its next "edgy" promotion:I admit Station 280's apology was better than I expected. They didn't take the usual route of blaming the victim for being overly sensitive: "We're sorry if you were offended." But here's how I read the apology:Another protest works

Someone complained that the flier had been online 12 hours despite demands to take it down. Once the protest started in earnest, it came down quickly.

I'd say even a 12-hour takedown is pretty good. In the olden days, an outfit like this would've blown off the protest. But now activists nationwide can cause real change in a matter of hours.

To recap: The bar apologized. The story made the local news, informing the community of the stereotyping issue. You can bet the owners won't do anything like this again.

Most important, we've helped educate people about the wrongness of Native stereotypes. Anyone who heard about the story has learned a lesson.

Remember how critic Michael Cooke carped about how protests are ineffective and activists are wasting their time?

This is the perfect example of what I'm talking about. These stereotypes--the sexy Indian, drunk Indian, and primitive Indian--haven't disappeared in the last century. They continue to appear almost every day. They'll disappear only when people stand up and protest them. As they did successfully in this case.

In other words, you lose, Cooke. Next time you think you understand social activism better than I do, think again. You're an ignorant child compared to me in this area. You literally don't understand how protests work. It's not rocket science to most people, but it is to you, apparently.

In short, power to the peeps via the Internets!

What would this business do if about 50 natives showed up either drinking, or to kick some booty?

Eskimo Joes in Stillwater, Oklahoma eat your heart out!

After 200 complaints, many from American Indians, managers apologize

people can be so cruel...especially what i came upon...this website should be banned.