By Laura PittsAnd:Comment:  As in Kindergarten "Indians" Celebrate Pow Wow Day, this event has a multitude of problems, including:

The only thing I'd say in favor of this Alabama school is that it isn't totally immersed in Plains or generic stereotypes: tipis, canoes, flutes, drums, etc. Some of its activities may apply to the Wampanoag of Massachusetts, the Cherokee or Creek of Alabama, and other eastern tribes.

Even Killen's "headdress" isn't standard for Plains chiefs or warriors. It's like the headdress worn by Powhatan (below) and other East Coast Indians. That isn't much, but it's something.

Below:  "Brady Killen, a first grader in Luanne Tubb's class, pets Isabella, a paint horse, during Heritage Day at Brownwood Elementary. Heritage Day was a celebration of America's Heritage that allowed students to dress as Indians or pilgrims and learn about founding American customs." (Laura Pitts) 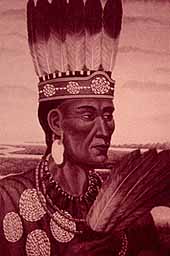