The right way to teach about Indians

Everyone benefits from Indian education

By Gabriel FurshongAnd:Comment:  I've read about IEFA before, but I don't remember the details. Nevertheless, this sounds like the right way to teach children about Indians. Don't relegate them to the early chapters of textbooks. Don't "honor" them in cheesy Thanksgiving pageants. Don't use lesson plans involving cutout headdresses or guest speakers with leathers and feathers.

Instead, integrate Indians into every grade level and class. Not only will students gain more knowledge, they'll gain more sympathy and compassion for Indians. They'll start to see things from a Native perspective--as we try to do here. They'll stop believing the stereotypes and start realizing the truth.

Then we won't have situations like mine, where I didn't know anything about the Indian land I grew up on. We won't have so many crybabies fearing ethnic studies and demanding white studies instead. We'll have fewer neo-Nazis telling minorities they should go back where they came from.

In other words, education is the key, and I'm trying to educate people. What some idiots people don't understand is that education is the flip-side of criticism and protests. We criticize to end the bad things (beliefs, practices, behaviors) and replace them with good things. Telling people there are hundreds of distinct Indian cultures is the same as telling them they're wrong to worship a Plains Indian mascot.

For more on the Montana program, see MontanaTribes.org and Montana's Multimedia Indian Education. For more on education in general, see Seeing Indians Is Believing and "Hatchets, Feathers, and the Color Red."

Below:  The wrong way to teach children about Indians. 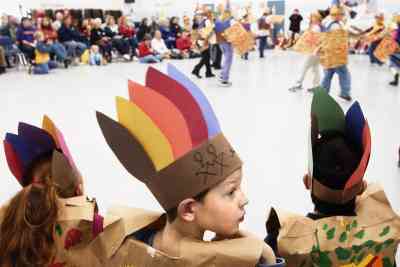 Rob, I wanted to write about the stereotype thing. They don't "disappear" but they sorta fade away. But every occasionally you get something like, well, Watto. (Some of Lucas' best friends are Jews. No, seriously. Steven Spielberg is one of them.) Of course, while Watto appears in two movies, Indian mascots are an American institution. I'm sure that people would give a damn about the World Cup if our team was the United States Redskins.

These days, other than mascots, it's more that Indians are magic.

Proper education about Indians would depend on knowledge of anthropology. You know, family structure, subsistence, things like that. No wonder white audiences know jackshit about Indians.

In my NYC public school I didn't have a single Native American in my class, but I did have classmates that were first generation immigrants from India, Bangladesh, South Africa and other places.

I suppose because we were taught from older textbooks that were a far cry from multi cultural, that only White children had a chance. It didn't work out that way though, the immigrants were, by a majority, getting the best grades, doing well socially and generally beating the curve and not by a little bit.

I will take this a step further. It has been white American policy and intent to "kill off" natives not only literally by genocide, but to replace an entire race of people with what "it", meaning the founding fathers; the church; the US government; the written media since colonial America on through L Frank Baums writings and into the nuclear age post WWII propaganda machine of Hollywood, ie., John Ford, MTV and the FCC, ALL consider to define and "refine" the good Indian versus the so-called "hostile" Indians.

I read a recent publication in Colorado about a man named Jack Slade, who history recalls as an innovator and uncredited person of the Pony Express fame era. While it specifically states many of the challenges the Pony Express riders faced en route, it was no surprise the term, "hostile Indians" falls into one of those challenges.

As you read on in the article about this man, you find his character, reputation and even certain people that he hung out with and knew, all whitemen, described as low-lifes, thieves and alcoholics. He is even shot, and survives, in a drunken argument with a fellow drunken acquaintence and eventually hanged, by a mob of whitemen over a game of cards I believe.

Where in this proud wild western story of American history and the "cowboy" glam and glorification of a publication do we find one "hostile" Indian?

American society at large is still brainwashed and faithfully ignorant in believing ALL INDIANS ARE BAD and that the only GOOD INDIAN is a you know what Indian, a DEAD Indian.

So I have a theory that 1 in every 100 non-Indians know "something" about the history of this land its original people and that 1 in 1000 non-Indians are completely aware of our plight!

By saying non-Indian, I am including African Americans that try to claim heritage, Asians, Jews that do not believe there was an American haolocaust, Chicana and Latino peoples that spat on Indians in the sixties but claim Aztec after they saw Dances with Wolves.

Burn American History books, accept and tell your children the truth before they go to college, see and learn the truth and become disillusioned dropout addicts.

...all of whom contribute to our marginalization as much as white people (even if they aren't "racist", they're still here) and most are in denial of how they oppress us and the privileges afforded them as non-Natives. In many ways, it's a lot more frustrating to have to engage with non-white occupiers, because while not all of them are stricken with settler mentality, most are in denial and plenty are unaware of the fact that they are 1) living off of our backs; 2) on the end that benefits from the colonial project; 3) in many cases, totally oblivious to our presence in "their" cities/neighborhoods.
I had the misfortune of working with someone (HUMAN RESOURCES, always a joke!) who had a major in ethnic studies, and asked me--straight up--if my respective "people" lived in "teepees" (I'm Hopi and Navajo), if I had a CIB (like I'm supposed to show it to her), allowed people to harass me by making anti-Indian statements, basically made sure the working environment was uncomfortable for only me, et cetera. Japanese-American, privileged and it showed: her combination ignorance/arrogance was astounding, as well as the entitlement she felt to all around her (a major cultural difference I've noticed that really sets Indians apart from many people). Anyway, she obviously didn't gain much from her "first-rate" higher education at UC Berkeley. Obviously, there's no reason why someone can't open a book and learn on their own (and obviously this person is a racist, hypocritical fool who was just miserable and messed up in other ways), but for all of those who won't it's important that they are are taught about more than manifest destiny and Sitting Bull because otherwise they grow up to know nothing about the peoples whose homelands they're occupying!

Uh oh, in between the '<>' was supposed to be a copy-paste of part of Anti-Anthropologist's comment:

"By saying non-Indian, I am including African Americans that try to claim heritage, Asians, Jews that do not believe there was an American haolocaust, Chicana and Latino peoples that spat on Indians in the sixties but claim Aztec after they saw Dances with Wolves."

The images in Stereotypes Disappear "Organically"? show that the "savage" stereotype is alive and well. I easily could provide a hundred examples, none of them mascots.

Plenty of stereotypical mascots, logos, and product packages are 50 or 100 years old. They haven't faded away yet and they won't unless we demand their removal.