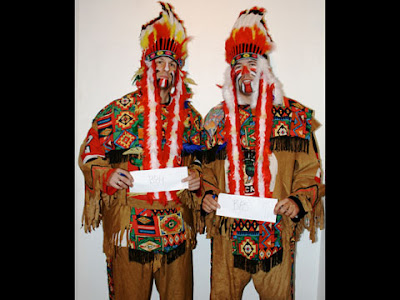 Comment: The fans look like a cross between a circus clown and a Christmas tree. They may be the most garish clowns "chiefs" ever. They're on a par with the Mardi Gras Indians--but those "Indians" aren't trying to imitate Plains chiefs. These "Indians" are.

What's really bad is ReelChicago's description of these fans. According to this media source, the fans are dressed as "authentic Indian chiefs" from the "Blackhawks" tribe. Adrienne nicely told us what's wrong with that.

So a publication that presumably has the resources to check a fact didn't do so. ReelChicago's writers and editors apparently had no clue how inauthentic these "authentic" chiefs were. Had no clue where the name "Blackhawks" came from. As far as they're concerned, there's a Blackhawks tribe somewhere out on the Plains where people dress like a cross between a Pendleton blanket and a turkey.

This is why I laugh when people defend stereotypes by saying they're a satire, spoof, joke, etc. These fans weren't joking when they dressed as comical Indian characters. The publication wasn't joking when it labeled their costumes "authentic." These people are truly as ignorant as they seem.

Even if the Blackhawks logo were accurate, which it's not, it gives people permission to think stereotypically. The permission goes like this: "We believe Indians are primitive people of the past, so you can believe it too. Dress up in stereotypes and you'll be just like our mascot. Millions of people will love you and no one will tell you you're wrong.

"Don't worry about Indians protesting you or calling you racist. They're all dead and gone. How do we know that? Because you can see it on our logo. Indians were half-naked savages and you don't see any half-naked savages running around, do you? Logically, they must be dead and gone or you'd see them in schools, at work, and on TV." 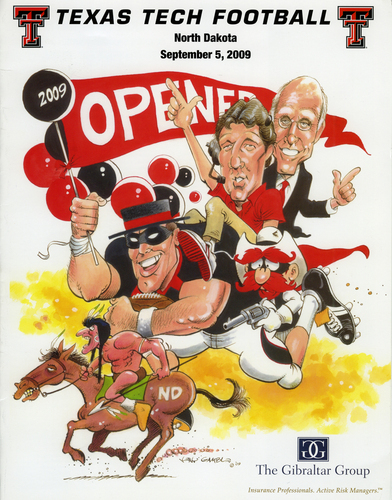 Message to sports fans: "If we can defeat one more half-naked savage, they'll all be dead and gone."

This is yet another example of how the media conveys stereotypes to the public. ReelChicago has told us these costumes are authentic. The costumes fit our stereotypical notions of what Indians look like. Given ReelChicagos's "authentic" label, most readers will assume these characters represent real Indians. They'll pass this (mis)information to their families and friends. If Vince Vaughn hires these clowns, millions of movie goers will see them too.

Let's also note the media's "authority" factor. The New York Times, for one, considers itself the paper of record. It prints "all the news that's fit to print." When we read something in it or the Wall Street Journal or the Washington Post, we tend to believe it's true. Same if we see it on a major network or cable news broadcast.

None of us knows anything about global warming or Obama or the Octo-Mom from firsthand knowledge, but we think we do. Why? Because we've seen or read about it in the news. We don't expect major media outlets to broadcast blatant lies. We expect them to check facts, confirm rumors, and give us some semblance of the truth.

Newspapers won't print stereotypical photos or ads showing blacks as Uncle Toms and Aunt Jemimas, big-lipped idiots eating watermelons, or spearchucking savages in grass skirts. But they will print countless photos and ads showing sports mascots and product labels featuring Indians as stereotypical chiefs and warriors. This gives the stereotypes a veneer of respectability, authenticity, and truth. The New York Times wouldn't print it if it were an offensive stereotype, right?

The ReelChicago label merely makes this implicit authority explicit. One way or the other, the media is telling us these stereotypes are "authentic." People believe what they see, especially when it's in an official source. When the media shows us a thousand stereotypical chiefs for every picture of a Sherman Alexie or Winona LaDuke, the stereotypes must dominate in people's minds.

This is how Americans "learn" about Indians, people. From the media...news and entertainment...everything from Cleveland Indians games to the Dudesons episode. That's one reason protests are inherently good: because they show people that real Indians live among us and don't resemble the stereotypes.

If you've got a better explanation for how people learn Native stereotypes, let's hear it. And don't give us any crap about Wild West shows or parents telling bedtime stories. Not unless you've got more than your worthless opinion to back it up, that is.

"As far as they're concerned, there's a Blackhawks tribe somewhere out on the Plains where people dress like a cross between Pendleton blankets and turkeys."

-- This gave me what may prove to be the biggest laugh of the day.

Okay, so the issue at hand isn't at all funny...but I still have to thank you for the giggle.