By Mead GruverThe pro-cowboy view:The anti-cowboy view:Comment:  I agree with Owen that the cowboy is a symbol of America. I said as much in America's Cultural Mindset, where I labeled our worldview a cowboy mentality. Given what the cowboys did to the Indians, I don't consider that a compliment.

In other words, I really agree with Western. The whole idea of a cowboy code is pretty silly. If people can't obey Jesus's simple command to love thy neighbor as thyself, how are they going to follow the cowboy code? Let's see them acknowledge the Ten Commandments first--the sensible ones, anyway--before we give them another 10 items to memorize.

I especially agree with Western's point that the code is a way to avoid hard, critical thinking. "Take pride in your work," for instance, is shallower than a bumper sticker. Is that really going to stop people from cutting corners or seeking the big score? Let's ask the British Petroleum executives who have broken rules and violated laws if they took pride in their work.

Back in 2003 I criticized Gene Autry's Cowboy Code. This code sounds similar. It probably deserves the same criticism.

For more on the subject, see George W. Bush = John Wayne and Mighty Whitey to the Rescue.

Below:  The perfect example of the American cowboy. He'll do whatever it takes to get his man--including a preemptive war and illegal torture. 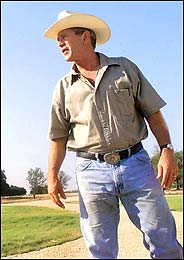