A blogger writes that Elizabeth Warren is experiencing her own "birther" moment. He explains what the controversy reveals about the conservative attitude towards race.

So conservatives hate whites who pretend to be minorities. They hate minorities (Barack and Michelle Obama, Trayvon Martin, Sonia Sotomayor, Shirley Sherrod, et al.) for not being submissive enough. Basically, if you're not white and proud of it--ready to support the white establishment--conservatives hate you. 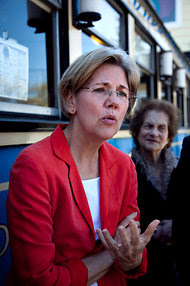