By Jess Bidgood and Abby GoodnoughComment:  So Warren checked the "Native" box only to meet other Natives? She never imagined that describing herself as Native would help her get a job?

If this is true, I presume she also joined many Native organizations to achieve her goal. Face-to-face encounters are usually more beneficial than dry directory listings, of course.

What? We have no evidence of her joining Native organizations to meet people? I'm shocked.

In short, I find her claim a bit hard to believe. People are right to be suspicious of this seemingly naive story.

For more on the subject, see Did Warren Check "Native" to Get Job? and Warren Documents Cherokee Ancestor.

Below:  "Democratic candidate for the U.S. Senate Elizabeth Warren faces reporters during a news conference at Liberty Bay Credit Union headquarters, in Braintree, Mass., Wednesday, May 2, 2012. Warren responded to questions from reporters on her Native American heritage." (AP Photo/Steven Senne) 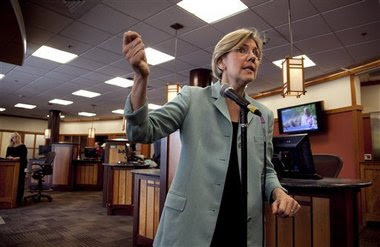 She wanted to meet people with similar roots? Meaning, other southern White people with vague family myths of Cherokee blood?

Heck, that's not hard to find at all!

The funny thing is she has not clue she was "THAT" person. Ya know, the one annoying the real Natives at conferences talking about her "Cherokee blood" and "high cheekbones"!!!