Why do Indians "live in past"?

‘Why Do You Indians Always Live in the Past?’

By Mike TaylorComment:  I rarely get accused of living in the past myself, since I'm not Native. But in my work I see the accusation often.

I think Taylor's analysis hits the nail on the head. For starters, that Indians and supporters like me do it a lot less often than people think. Taylor's 10% figure sounds about right to me.

In fact, most of my postings about the "past" are reactions to others who are talking about the past. Like Scott Brown berating Elizabeth Warren for claiming a Cherokee ancestor. The real question is why this privileged white man is living in the past--bringing up an old issue about ancient history that has no relevance to Warren's qualifications.

Taylor also nails the reasons Americans don't like to hear about the past. Yep, these discussions are "an unpleasant reminder to whites that this country is not theirs." That's why Americans favor their Indian mascots and stereotypes--because it lets them think of Indians as dead and gone. And therefore no longer an issue--a stain on America's honor.

Indeed, that's what all the antipathy toward Indians, blacks, and other minorities is about. Their continued existence reminds whites that their ancestors were moral criminals--killers, slavers, and thieves. Many whites would prefer nonwhites to be gone. Hence the Trail of Tears and the desire to send slaves back to Africa and Latinos back to Mexico.

In reality, all Americans, especially the white majority, live in the past. School lessons, place names, monuments, holidays, coins, parades, TV shows, etc., etc., etc....they're all about glorifying the Pilgrims, the Founding Fathers, and other white icons. There may be an old hermit somewhere who doesn't live in the past, but the rest of us do.

The personality cults of Washington, FDR, or Reagan aren't much different from those of Mao, Stalin, or Castro. But our venerated leaders were white and democratic, so it's okay. We're living in the good past, not the bad past like those Indians and Commies.

For more on the subject, see Colorado Rejects "Genocide" Label and Chomsky on Genocide Denial.

Below:  White people living in the past. 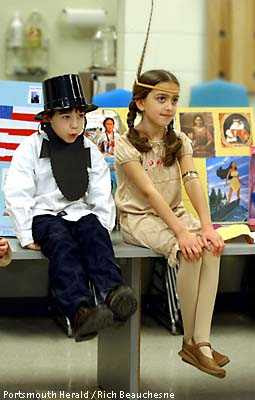 "The real question is why this privileged white man is living in the past--bringing up an old issue about ancient history that has no relevance to Warren's qualifications."

Why do you choose to side with the wannabe in this case, and not with the wannebe in the case of Ward Churchill?

I still see the past and the traditions we had.

I trust I've covered the controversy enough to satisfy you, DMarks.

I still don't think this issue has any relevance to Warren's qualifications to be a senator. I'm sure you could find several lies or exaggerations in any public figure's past. For instance:

The controversy over Warren's heritage is akin to the one over Bush's going AWOL from the National Guard. Yes, it's one small example of her character, but it's not a deal-breaker for most people.

This is a great article. I'm a mixed American, largely Native & your article helps me to see that I'm not the only one going through this stuff or thinking a certain way. People get angry with me if I mention anything about being Native or Mexican. It's not just whites. I've run into blacks & Latinos who feel the same way. They seem to think that if we forget the past, negate our heritage & use "generic" terms to identify ourselves that the world will be a better place. Not so.I often have to explain myself to others & validate my living in the U.S.