By Patrick B. PextonAnd:And:Redskins: The Clock Is Now Ticking on Changing the Name

By Dave ZirinComment:  Patrick Paxton is the Washington Post's ombudsman. His commentary is another sign that people are starting to take this issue seriously.

Note that I compared wearing headdresses to medals in Hipster Medals Instead of Headdresses. Glad to see someone else recognized the validity of the comparison. 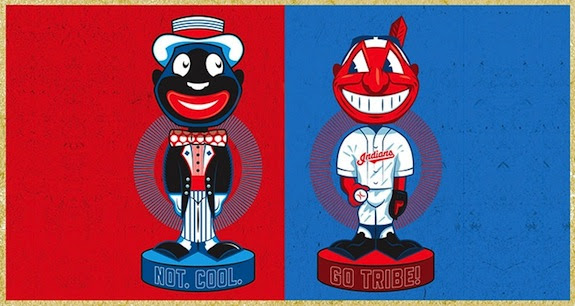 “If you ask me, it is offensive,” Begay said midway through the segment, when asked about the Redskins name. “And I think it’s just a very clear example of institutionalized degradation of an ethnic minority, that being the Native American people. To classify it as simply a matter of political correctness only seeks to trivialize it a little bit, to an extent that it undermines the very human foundation of the people itself. I mean, if you look further and deeper into the issue, it’s about the culture, it’s about the identity, it’s about the history of our people. And that in and of itself is something that I think needs to be looked at further.

“I don’t ever see myself going to a Redskins game,” he continued. “Or I should say, if I were to take my kids to a Redskins game, and we were to see a non-native dressed up in traditional regalia, with eagle feathers in a headdress, dancing around, basically mocking the culture and the tradition, it would be very difficult to explain to my children. And not only to my children, but children of many families across this country. I mean, this country was founded on the premise of equality and human rights and civil rights, and I don’t know at what point we decide what our tolerance levels are for discrimination. And who gets to decide? I think that’s the compelling question here, is who gets decide what is discriminatory and what isn’t?”