Below:  "Actress Lynnette Haozous (right) plays out an emotional scene as the female lead Kai Yazzie with actor Jerome Olona (left) who plays Jason Black in the play Fadeaway." 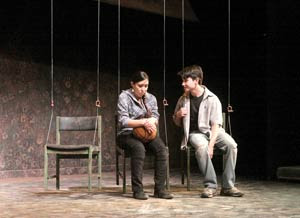