Apology would be inspiring

In any case, I lean toward apologies being worthless, not inspiring--unless they're backed by actions. I'd say things like Indian gaming have done more to "heal" Indians than apologies ever would.

For more on the subject, see Apology Is Meaningless and Apologies Aren't Enough. 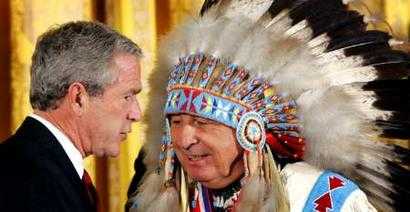 Writerfella here --
Except that Indian gaming continually has been under fire, especially by the National Indian Gaming Commission. Witness this:

GAMBLING REGULATION CHANGES CRITICIZED, WOULD COST MILLIONS
Miami,OK (AP - 2/21/08)
Participants at a Congressional field hearing criticized proposed changes in Indian gambling regulations, saying those would accomplish little and cost millions of dollars.
Three panels of tribal gambling, state and local officials appeared before US Reps. Dan Boren (D-OK) and Tom Cole (R-OK), on Wednesday to discuss the impact of changes proposed by the National Indian Gaming Commission.
If approved, the changes would qualify many current Class II, or Bingo-based, electronic gaming machines as Class III, or slot machines. Oklahoma would be affected significantly by Class II regulation changes because more than half of the games in this state are Class II.
"The (proposed) regulations are a solution in search of a problem," Cole said. "It will cripple economic development in Indian Country, not promote it."
Boren maintained that changing current Class II standards would hurt established tribal gambling operations that boost rural economies. Both congressmen said they were alarmed that serious consequences to adopting the changes seemed unheeded.
"We don't want the equilibrium
disturbed," said Cherokee Principal Chairman Chad Smith. "I find it quite interesting that the state and state officials have not complained about these (proposed) changes."
Complying with new Class II standards would have an immediate impact of $30 million for his tribe, said Brian Campbell, Chickasaw Enterprises CEO.
NIGC Commissioner Norman DesRosiers said marking a "bright line" between Class II and Class III machines would maintain the integrity of Indian gambling and the intent of the Indian Gaming Regulatory Act of 1988.
"We don't think we're regulating (Class II) machines out of existence," DesRosiers said.
The NIGC extended a comment period on the proposed changes from Jan. 24 to March 9. Officials said NIGC Chairman Phil Hogen, who suffered a mild stroke this week, would make a final decision. No announcement date has been set.
Tribal officials said they anticipate litigation if the proposed Class II changes are approved.
--------------------------------

Basically, the proposed changes would impel tribal gaming revenues toward higher percentages due to the various states under their compacts with the various tribes. States therefore only would smile as their 'piece of the action' grew larger and larger without compacts having to be amended or redrawn. KA-CHING! So much for Indians being 'healed' by their 'own' enterprises...
All Best
Russ Bates
'writerfella'

Speaking charitably, you don't seem to understand what you've posted. The government is trying to limit the tribes' ability to succeed with Class II slot machines. This limitation, which wasn't part of the original law (IGRA, 1988), is what would hurt tribes.

Yes, states would get more money if the feds succeed in limiting Class II machines and forcing tribes to switch to Class III machines. Again, the proposed limit is what would hurt tribes and help states. Not Indian gaming, but an unwanted limit on Indian gaming.

Incidentally, most of the Class II machines are in Oklahoma and Florida. So the proposed changes would mainly harm the tribes in these states. The tribes in states where Class III machines are prevalent would continue to prosper through Indian gaming.

In short, your posting does nothing to indict the healing power of economic self-reliance via Indian gaming. Since you failed the first time, try again.

Writerfella here --
writerfella only wished to establish that 'Laissez faire Capitalism' nowhere is present anent Native gaming, neither in compacts with individual states nor in regulations from the National Indian Gaming Commission. An old American aphorism most certainly applies in such cases: "If it ain't broke, don't fix it..."
All Best
Russ Bates
'writerfella'