Will there be an Indian in the upcoming Wolverine movie? Well, maybe.

Maybe they'll change Silver Fox's backstory, or maybe Collins will be the umpteenth non-Indian to play a stereotypical Indian woman as sex object. 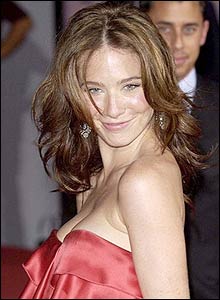 Was it your intent to make this chick look as fug as possible in the photo you provided? She look like she just blazed a pound of that sticky icky before struttin the red carpet.

No, it was my intent to provide a high-resolution picture of Collins so readers could compare her face to Silver Fox's. This picture was one of the best ones I found for that purpose.

I actually, came here to see if she had any actual Native ancestry.

I saw the infamous leaked print of the film.

She is as you said, a sex object and worse. Her powers are reduced so her character is a chess-piece that propels the main (white) character's story.

If you're comfortable, I'd be interested in learning about a particular plot-point and whether the lore they use is (as typical) made-up or sourced.