The argument against Kosovo

One Nation, IndivisibleComment:  Russell Means and company are also guilty of unilateral secession. Even if they had the right, which they don't, what if other Lakotas didn't want to secede? Who gave Means the right to decide on their behalf?

Unless there's a vote on the matter, any secession is morally if not legally invalid. 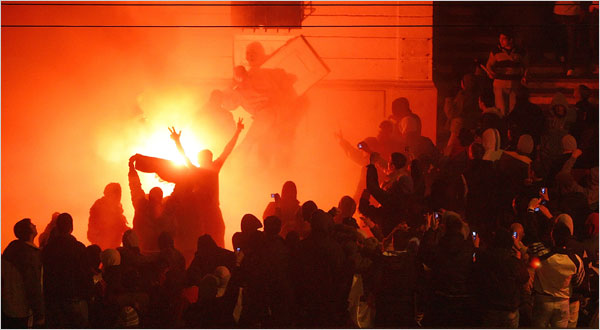 The Kosovo situation should be looked at as an example of a colonized territory breaking free of the country that conquered it. From Wikipedia

"[1912] Many Albanians fled into the mountains and numerous Albanian and Turkish houses were razed. The reconquest of Kosovo was described as retribution for the 1389 Battle of Kosovo."

During the 1920s, Serbia proceeded with an ethnic cleansing campaign against Kosovo's indiginous population, much like they did during the 1990s.

Kosovo is now pretty much free of the unwanted and usually brutal foreign occupation and plunder by its neighbor Serbia, which began less than 100 years ago. It has had a tougher time of recognition due to the mistake, when Yugoslavia was created, of forcing Kosovo to be part of Serbia instead of treating it as a sub-state of equal status (like Croatia, Montenegro, etc. were).

Dmarks has no idea what hapends here! In Kosovo.
Kosovo has NEVER under Albanian controls! After the Ottoman empire has conquest this part of Europe, everything was belong to them. After that, the territory has be return to people of who they took it. So,that means, they return it to Serbia, of course!
Dmarks, why you don't say anything about the Albanian terror during the period after WW2 under the1998 and after 1999? If Kosovo should belong to Albanians and if they are here that long, where is their city's, villages, cemetery, buildings, monuments?????

if the Kosovo became independent, that means the ethnic cleansing (because they do it from WW2 until those days, even today) is legal? Terrorism is legal, killing other people because they belong to some nation is legal, reaping is legal, nationalism is legal, saling people vitals organ are legal...

got some true information!