Remaining 'authentic' in a changing worldAnd:Comment:  To reiterate the obvious: "The general public receives vast amounts of images from modern media, including movies and television."

There's only one problem in this otherwise fine editorial. When the author says:If a tribe has none of its traditional culture left and has only a fraction of "Indian blood," in what sense are they Indians? The point of federal recognition is to restore a tribe to a semblance of its previous existence. It's not to create a facsimile of a tribe from people with no cultural or biological links to the tribe's past.

That's why the BIA imposes stringent rules on who gets to be federally recognized as a tribe. And why most "tribes" fail to get recognized. Without strong cultural or biological ties, they're no longer Indians. 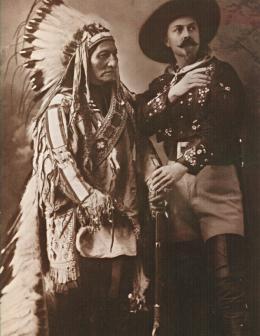 The misrepresentation of history, traditional history and information at this site sickens me. Are you rewriting history?
You are Not Authentic Indians!!
I will share this with with others who are!!

I never said I was an Indian, authentic or otherwise. In fact, everyone knows I'm not an Indian--except you, apparently.

Which aspects of history do you think I've misrepresented in the 1,800-plus pages and 3,300-plus blog entries of this site? Could you be more specific?

If you're talking about this particular article, I didn't write it. I quoted it. Feel free to contact the editors at Indian Country Today if you disagree with what they said.

Yes, please share this site with everyone you know. Since it earns praise from Indians and non-Indians alike, I'm happy to get more exposure.

Redshellwin: Are there AMerican Indians in the BIA, making those decisions about cultural and biological ties? I hope so, it would be sad to see history again repeated by non-Natives once again deciding who is and isn't "Indian". It is an interesting article. It still bothers me that Native people continue to call themselves "full-blood" or "half-breed" etc.... and see no connection between this and the terms "buck", "squaw", or even "octaroon" or "mulatto". lol @ "not authentic indians" comment above.

Writerfella here --
It is more the case that modern America wishes that the bison and 'authentic Indians' would just go away and stop bothering them. Or in the words of this blog, providing "clutter" to their otherwise continued and uncluttered pursuit of truth, justice, and the American way. Bison and Indians remind the 'dominant culture' that the United States of America devastated the forests, the wildlife, the Native peoples, and even the air and the water and the land itself in building their monotheistic democratic empire. The 'greatest nation on earth' and its modern citizens have a past they very much would like to sweep under the rug of history, along with the Native survivors and anything else that 'clutters' the road to their future...
All Best
Russ Bates
'writerfella'

Most of the BIA's employees are Indians. More to the point, the Assistant Secretary who heads the BIA is an Indian, and he or she makes the final decision on a tribe's recognition. So yes, there's substantial Native input on the issue.

Today more than 95 percent of the bureau's twelve thousand employees are Indian.

Yes, I'm trying to reduce the "clutter" of authentic Indians by posting 5-7 blog entries on them every day. That's because the more I post, the less I think you'll learn about Indians. My goal is to miseducate people so they'll believe all the misinformation out there.

How stupid can you get?

This claim is almost as silly as Anonymous's original claim. In case you hadn't noticed, the vast majority of the items I post are from articles about Indians and quote Indians. If you think I'm "misrepresenting" Indians, you must think the media (including the Native media) is misquoting them. Or that it's quoting them accurately but the Indians being quoted are inauthentic.

So which is it? Recently I've quoted Winona LaDuke, Russell Means, Irene Bedard, and Robert Mirabal among dozens of others. Which of these well-known Natives have I somehow misrepresented?

Writerfella here --
Yeah, yeah, yeah. Then drop the templates and practiced rote rhetoric and the attitude that, once you have written something, Rob, you do not have to rewrite or restate it any differingly. The echoes continually heard from you on this blog really are like Newspaper Rock because you think that your words as well are chiseled on stone, or at least scribbled on a great piebox in the sky. writerfella posts as much as he does because he is a writer fella and everything is new to him every day, including what he writes or rewrites that day...
All Best
Russ Bates
'writerfella'

I don't use "templates" on the 1,800-plus pages of my website. You know, the pages that complement the 3,300-plus postings in this blog? Have you ever read one of them, or are you just spouting off ignorantly, as usual?

I'm confident I've written more about Indians than you ever have or will. In fact, I've already explained how I've written and published more than you have. I've explained this point repeatedly.

If you're getting too old to remember what I said, that's your problem. Take a pill or something before you grow senile. Whatever you do, stop embarrassing yourself.

Re "everything is new to him every day": That's one way to express your child-like insistence that you don't need to prove your case because you know best. Like some kindergartner, you think the world revolves around you and everything you say is precious. Too bad no one else agrees.

You repeat your claims and I repeat mine. The difference is, I back my claims with facts and evidence. When you present the first shred of documentation to back yours, I'll consider changing my position.

Until then, I have the facts and evidence and you don't. All you have is your anecdotes and opinions. As you've said, everyone has an opinion, which means yours are basically worthless.

If you're writing anything intelligent about Indians every day, you sure aren't posting it here. Why don't you share your thoughts on all the Native-themed movies, TV shows, books, and comic books you've seen or read? You know, the way I do?

On the other hand, if you don't like what I'm posting, feel free to get lost. Stop your hypocritical whining and leave if this blog bothers you. As I've told you before, that's the only choice I'm offering.