A Thing For Pocahontas 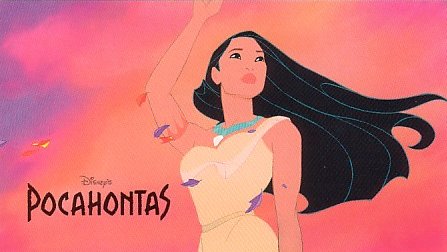 Would a "true" Pocahontas story succeed?

If "The New World", a film I actually really enjoyed and thought was truly beautiful if not as accurate as I'd have liked, have been nearly as enjoyable if the false love story had been left out?

It's hard to say. The cartoon version is fun and dramatic because of the idea of a grown Pocahontas rebelling against her people and singing lovely songs.

"The New World" is a good watch because of the way it was shot (I'm a film student, bear with me) and the performances are quite good. Q'Orianka Kilcher truly impressed me, especially considering she was only fourteen at the time.

The idea that a Pocahontas story can only be watched and enjoyed if there is an invented romance between Pocahontas and John Smith is just absurd! If given the chance, I would tell a much truer story of the settlers. The dramatic focus would be on the Native Americans' loss of their land and rights and on the struggles of the colonists to survive, not some sappy romance!

For heaven's sake. Are we all so easily entertained (and easily bored) as a society that we cannot get through a two-hour history lesson, whether in cartoon form or in the form of a lovely PG-13?

Disney movies don't have to be romances to succeed. Consider The Emperor's New Groove, Brother Bear, or Lilo and Stitch, for instance. That argues for doing an unromantic version of Pocahontas.

Despite the made-up romantic elements, I enjoyed The New World. The cinematography was gorgeous. I gave it an 8.0 of 10 overall.

The problem with Pocahontas movies is that her story isn't that compelling. A girl saves one man, marries another, and dies. After allegedly rescuing Smith, the rest of her life is anticlimactic. It would be better to invent a story about a fictional Indian maiden than to keep retelling this glum tale.

Here's an idea for storytellers. Tell us what would've happened if Pocahontas had lived. Would she have gone on to become a great Indian leader? Or would her people have turned on her because she sold out to the English? Inquiring minds want to know.