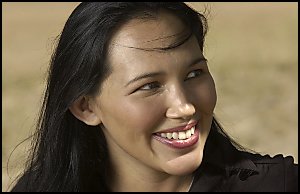 Writerfella here --
Bedard's only problem is that, she can't go anywhere that Tantoo Cardinale can't find her...
All Best
Russ Bates
'writerfella'

At least she turned down a role because it was stereotypical. Didn't you say something about how actors can't do that because it would be professional suicide? She did it and it apparently didn't hurt her career.

Russel said:
Bedard's only problem is that, she can't go anywhere that Tantoo Cardinale can't find her...
Hey, what do you really mean with that?

Russ has a problem saying what he means. He can't or won't write clearly.

I guess he means that Bedard is following in Cardinal's footsteps. That Cardinal is the original and Bedard is some sort of imitation. If so, I don't agree.