Educating Russ about the Anasazi

Kiowa sci-fi writer Russell Bates has claimed the "Anasazi" aren't related to today's Pueblo people. To confirm or deny this claim, I sent the following inquiry to archaeologist Paul Reed:Reed replied as follows:Alas, Russell Bates hasn't provided a shred of documentation for his cockeyed theories. In fact, he hasn't even stated his theories with anything resembling rigor or clarity.

In contrast, Paul Reed has documented his position in a book published by a scholarly press. Reed confirms what I've read in dozens of books and articles: that the so-called Anasazi are the ancestors of the Pueblo people.

You can decide for yourself whom you believe:

1) An archaeologist who has written a book on the subject and who makes his living as an Anasazi expert; or

2) An amateur who has nothing but daydreams to support his claims and who makes his living writing fantasies.

It's a tough call--not--but I'll go with the expert over the amateur every time. Poor Russ loses another debate--badly. He doesn't seem to have a clue about the Anasazi's actual history.

For more on the subject, see Anasazi = Ancestral Puebloans? 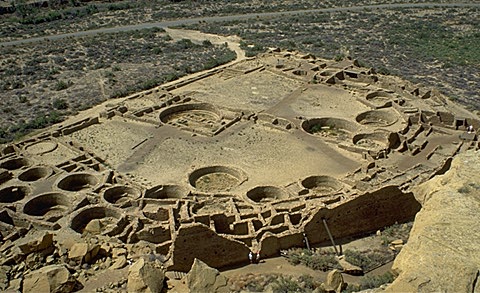 Writerfella here --
How can one lose a debate when there never was a debate in the first instance? writerfella heavily researched before writing Anasazi The Screenplay and has continued to update that research as it became one of his few passions. And even in Reed's books, this particular phrase ALWAYS appears: "The Anasazi, whether the Mesa Verde group, or the Chaco, or the Fremont, or the Kayenta, or the Virgins, are THOUGHT (emphasis writerfella's) to be the antecedents of the modern Pueblo Indians." Reed even hedges that claim in his communication to you when he mentions that "specific ancestries" are very complicated and that he cannot say with any certainty which Anasazi group built which Pueblo town. writerfella notes that your query exceedingly was generic, without asking whether the Anasazi had a recessive trait of polydactility, or if a Ponderosa pine marked the day's passage in central Chaco, or if there was a Great Meteor that was an Anasazi worship object, or any number of other mentions by writerfella that you have disputed. Kind of like meeting Nils Bohr or Leo Szilard and then only asking the time of day...
All Best
Russ Bates
'writerfella'

I didn't bother Reed with a lot of specific queries because I didn't know if he'd answer my general query. If he continues our correspondence, I'll ask him about your crackpot theories.

Of course, that may be difficult since you've never laid out your claims and the supporting evidence. With your dreamy (i.e., vague) writing style, all you ever do is hint at your contrary beliefs.

I suspect that's because you're afraid of having your ignorance exposed. We know you've devoted two decades to your unproduced script. If it turns out you don't know what the hell you're talking about, you'll look like a bigger fool than ever.

How could a single rock or tree tell us anything about a culture spread over hundreds of years and thousands of sites? The very idea is absurd. Perhaps that explains why you haven't explicated your theories: because you know they're as lightweight as air.

Reed qualified his position by saying the experts don't know which groups of Anasazi established which Pueblos. He didn't qualify the main point--the point you've so clearly failed to grasp. Let's reiterate it for everyone's edification:

"The Anasazi or ancient Puebloans were most certainly the ancestors of the Modern Pueblo people. The lines of descent, in general terms, are beyond debate in the field of American archaeology."

Feel free to contact Reed yourself if you think you know more than he does. Don't forget to share copies of your correspondence with us. I'm sure the results will be enlightening.

In fact, if you're not too much of an intellectual coward, you'll be glad to test your ideas against the experts'. You know, the way I just did? So go ahead and do it, fraidy-cat.

Writerfella here --
Read Reed's books, and you will find one particular statement: "No researcher should regard the testimony of a Native tribe as to the history they report..."
All Best
Russ Bates
'writerfella'

Interesting exchange. I would suggest the inclusion in this debate of the extensive and growing scientific evidence from the field of population genetics. While there are significant gaps in the data two conclusions are certain; All Native American groups today can be traced to multiply migrations from central Asia, so we know they weren't europeans. And we know that the crazy idea that Indian civilations were built by space aliens is, well, just science fiction. Indians have been here before the United States of America was a country and they will be here after it ceases to be a country.

I would strongly suggest that Mr. Bates do what any traditionally-inclined Indian would do -- go ask the Pueblo people who they're related to.

Oral history is proving to be quite accurate in tracing our tribal histories. I offer as evidence the case of Odette, an ancestral Makah village which was buried in a landslide some 3,000 years ago.

A few years back, the village reemerged from the muck. The artifacts that the Makah Tribe extracted from the village were exactly the same construction and materials as those crafted today. Exactly the same, friends. The basketweavers who told me this at one of the gatherings was very gratified to know that the techiques and materials she was taught to use were handed down so completely...

There's other cases but I think that this one will suffice for now. I need to get back to work!! Mr. Bates, do go to Hopi and the Rio Grande and go talk to the people and they will give you straight talk.

Or you could just acknowledge that you're writing science fiction and be done with it...

Writerfella here --
In a world where 'if's, 'ands', or 'buts' were horses, Rob Schmidt would ride...
All Best
Russ Bates
'writerfella'

Writerfella here --
writerfella ALWAYS has acknowledged that he writes science fiction and, after forty years, he is far from done with it. His teachers were Harlan Ellison and Gene Roddenberry and Gene L. Coon and D.C. Fontana and Ursula K. LeGuin and Fritz Leiber and Frederik Pohl and Samuel R. Delany and Frank Herbert and Theodore Sturgeon and Joanna Russ and R.A. Lafferty and Robert Silverberg and Damon Knight and Kate Wilhelm and Avram Davidson, among many others. And the emphasis that all of those writers put on their output was SCIENCE! It is known fact that the Anasazi had a peculiar genetic recessive of polydactility, with six-fingered hands and six-toed feet. Show writerfella Pueblo people with that characteristic and there may be truth to their claim. Rob Schmidt also has said that Anasazi people only were four feet tall. So, show writerfella Pueblo people who only are four feet tall. That should be enough to make writerfella's point and no amount of oral history can erase the SCIENCE as it has been recorded...
All Best
Russ Bates
'writerfella'

Welcome, Deb and Michael. I didn't expect to see you here. We have lots of interesting debates, but they usually aren't about gaming. ;-)

Re "No researcher should regard the testimony of a Native tribe as to the history they report...": That testimony would be better than your lack of testimony, Russ. As usual, you present no evidence or documentation for your wild theories. Until you do, everyone should assume you're making them up.

Paul Reed didn't say his position was based on Pueblo testimony, so your statement is irrelevant. In fact, the connection between the Anasazi and Pueblo people is based on the strong continuity of art and architecture, among other things. Your non-theory doesn't explain how this continuity could exist if the two cultures are unrelated.

No, it is not "known fact that the Anasazi had a peculiar genetic recessive of polydactility." Again, "known" is what you document with facts and evidence--something you've repeatedly failed to do. We don't "know" any of your fanciful claims until you make them known to us.

As for how tall the Anasazi were, I've already corrected your stupid lie. You asserted the Anasazi were tall, again with no evidence, and I disproved your claim. People can read all about it in Anasazi = Ancestral Puebloans?

Alas, you don't seem to have a clue about how science works. You apparently think that if you keep asserting your claims without evidence, we'll eventually believe you. Unfortunately for you, the opposite is true. Until you prove your case, we'll continue to disbelieve you. Your Anasazi fantasy ("Fantasazi"?) will remain just that...a fantasy.

P.S. Let's all note that Russ is willing to quote Paul Reed but isn't willing to contact him. Can you say "intellectual coward"? Russ knows he'll lose the debate so he avoids it. He pretends the archaeological consensus doesn't exist so it can't hurt him.

As for your list of teachers (i.e., your incessant name-dropping), that's nice. Too bad you didn't learn more about writing novels and screenplays from them. Alas, your main claim to fame is still one mediocre Star Trek cartoon. I'd be embarrassed if that was all I'd accomplished.

I've seen part of your Anasazi script. It seems to be your typical Von Daniken-style Indiana Jones lite. Your version of the Anasazi probably received mystical powers from Atlanteans or aliens. They vanished centuries ago because someone lost or stole their magic crystal (meteor). Now they appear as ghostly figures in columns of light. Woe to anyone who meets them!

If so, can you say "stereotypical"? I hope your script gets produced just so I can review it. I'm betting it'll be a Stereotype of the Month entry for sure.