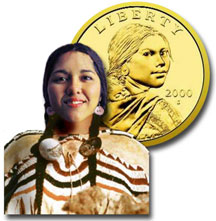 Please refer to Sacajawea's website at www.faceofgold.com for complete and updated information of Sacajawea. The true model of the Sacajawea Golden Dollar, Randy'L Teton of Idaho.