ManitouComment:  You can read the whole entry on Manitou, but this summary and the pictures tell you all you need to know.

How wrong is this character? Let's count the ways:

1) "Manitou" is the name for a general class of spirits. It's not the title of the "chief" god.

2) The Algonquian people didn't have gods as Westerners conceive them. As Wikipedia notes: "These Manitous do not exist in a hierarchy like European gods/goddesses, but are more akin to one part of the body interacting with another and the spirit of everything."

3) This Manitou is a Plains chief on a horse, not a typical Algonquian Indian of the Northeast. The Algonquian people didn't wear feather bonnets and didn't have horses.

(This depiction is reminiscent of the one in ALL-STAR WESTERN #117, which was published in 1961. Manitou first appeared in a Marvel comic in 1973. People were ignorant about Indians then and they haven't gotten much better.)

4) The "Anasazi" are a group of Indians who lived in the American Southwest. They had nothing to do with the Woodland or Plains Indians. They weren't gods and they weren't ruled by someone named Manitou.

5) "Anasazi" means "enemy ancestors" in Navajo. Why would any group of Native deities choose this as their name? The Navajo wouldn't call their deities "enemies" and other tribes wouldn't use Navajo words.

Give Marvel a point for including Native deities whenever its pantheon of gods (Zeus, Odin, et al.) gathers. Take away a point for making "gods" such as Manitou stereotypical.

Below:  I, the Algonquian spirit Manitou, have manifested myself as a Plains chief because you, the white reader, don't know any better." 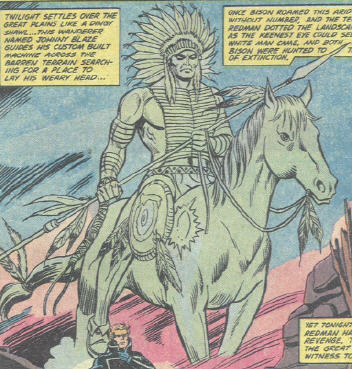 Manabozho is the Algonquin trickster figure. At least it is from the same language group as "Manitou".

Yes, DMarks, but "Manitou" isn't an alternative name or title for Manabozho the trickster figure. It's a general name for a spirit. I'm not even sure the Algonquin tribes consider Manabozho a manitou.

So Marvel's Manitou character is wrongheaded even if it's based on genuine Indian names and concepts. That was my point and I'm sticking with it.

Manitou" is the name for a general class of spirits. It's not the title of the "chief" god.
And here I just thought it was a real bad 1970's movie.Marvel tries,but we still the memmory of Thunderbird or Thundercloud or whatever it was in the X-Men.