No postings based on Native traditions?

You can call me out all you want, Kalisetsi. I can take criticism if you can. <g> I wouldn't be posting my thoughts several times a day if I couldn't.

The "traditions" I was referring to include thinking several generations ahead (i.e., long-term over short-term), favoring the community over the individual, and respecting the environment. More generally, an acceptance of cultural diversity. A belief that no culture or religion is perfect or best. A multicultural perspective.

These traditions don't belong to any one tribe or cultural group. They're common to many Native cultures. Although they're broad and generic, they're real enough.

You say you haven't read any postings based on these traditions? That's odd, because I could list thousands that fit the rationale I gave. If you still don't know what I'm talking about, say the word and I'll start listing them.

If you thought I meant specific cultural traditions such as going through a puberty rite, doing a dance at a certain time of year, or getting permission from an elder to speak...no, that isn't what I meant. These may be broad, generic traditions, but they're typically Native rather than Euro-American. And they aren't "sensitive" or private, so we're free to talk about them.

Now that I've explained what I meant, you can see that my postings are indeed based on Native traditions. These traditions also happen to be my traditions.

"Redskin" based on Native traditions?

As for the conflict you mentioned, I presume you're referring to my criticism of Sheena Wassegijig. She referred to her Ojibway traditions as her excuse for using "Redskin," an ethnic slur, as a magazine title. I ripped her for it.

My response went something like this: If that's an example of "Native traditions," I understand Native traditions better than you do. You don't promote yourself and your magazine by insulting your brothers and sisters. It's not humble, respectful, or honest and it doesn't honor people.

Do you disagree with my interpretation of these Native traditions? Then go ahead and make your case. Explain to us how the "Redskin" title proves that Wassegijig respects Native traditions and I don't. Good luck with your answer...you'll need it.

Below:  Respect for Native traditions? Yeah, and "Nigger" magazine shows respect for African American traditions. Not. 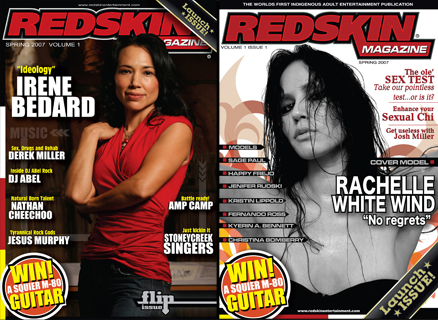